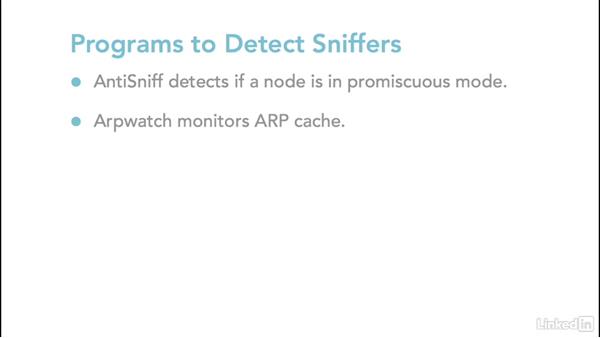 Sniffing can be a precursor to an attack. Learn how to defend against sniffing by using IDS, along with programs to detect sniffers such as AntiSniff and arpwatch.

- [Instructor] Sniffing can be a precursor to an attack.…Learn how to defend against sniffing.…Unauthorized sniffing may be considered illegal,…unless it's required as part of employment,…or you're monitoring your own network.…However, knowing this generally doesn't stop a hacker…from sniffing the network.…There are some best practices to defend against sniffing.…Disable any open ports in common areas…to discourage hackers from tapping in…and sniffing network traffic.…Use encryption for email, webpage transaction,…or configuring devices.…

Keep in mind however,…encryption will not protect…broadcast traffic onto the network…for device discovery such as DHCP or ARP.…There are programs that help detect sniffers.…There's AntiSniff software that can monitor a network…to detect if a node is in promiscuous mode.…Arpwatch monitors MAC address and IP address pairings…in the ARP cache to see if there is duplication.…Snort is an intrusion detection system,…and its arpspoof preprocessor can be used…to detect instances of ARP spoofing,…