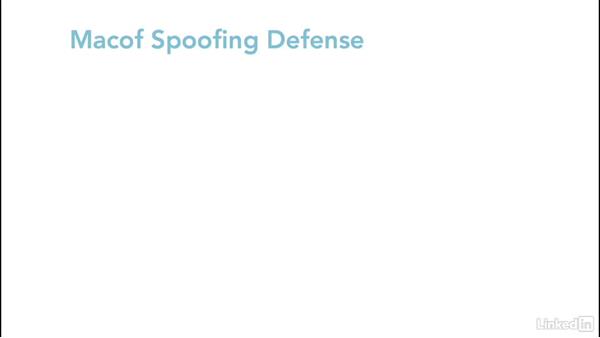 Layer 2 can be a very weak link. Take steps to defend against MAC attacks, MAC spoofing, CDP attacks, and STP attacks by configuring the switch to defend itself.

- [Narrator] Layer Two, or the Data Link,…can fall victim to a number of different type of attacks:…a macof attack, MAC spoofing,…Cisco Discovery Protocol attack,…or Spanning Tree Protocol attack.…Layer Two can be a very weak link and if attacked,…any higher layers are most likely affected,…and that will include your users.…Best practice is to take steps to protect…against these types of attacks.…On a switch, to protect against a Macof Attack,…the network administrator should use…switchport port security.…

This limits the number of MAC addresses…connecting to a single port on a switch.…On a Cisco switch, this is very easy to configure.…We would first say switchport mode access…and that would set the interface mode as access,…if it isn't already.…Then we would assign port-security,…and then we would say enable sticky MAC.…A sticky MAC allows only MAC addresses…that are dynamically assigned…or administratively added to stick to the port.…

This tells us what would happen if there was a violation…and Cisco suggests you shut down the port.…