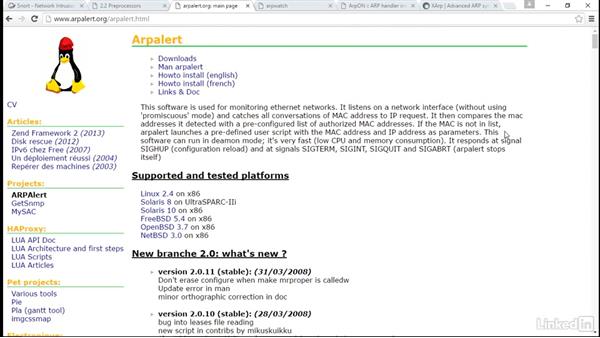 ARP resolves an IP address to MAC addresses. ARP was not designed to deal with malicious activity such as cache poisoning or spoofing attacks. Lisa Bock investigates tools to detect ARP attacks.

- [Voiceover] Address resolution protocol…is used to resolve an IP address to a physical address.…The original RFC was written in 1982.…ARP wasn't designed to deal with malicious activity.…Moreso it was so that all hosts knew…where everyone was on the network.…However, we know there are attacks.…So you should protect your network…and monitor for ARP attacks.…Let's take a look at some of the tools that are available.…I'm at this website snort.org.…Snort is a powerful intrusion detection system…that you can use.…

Once you configure it it will monitor for threats.…However there is the ARP Spoof Preprocessor.…And there's a couple configuration options…you can include here to monitor for some attacks.…Arpalert will listen to a network interface…and catch all conversations of mac address…to IP address requests.…Now this is going to compare with a list…of authorized mac addresses to make sure…that nothing suspicious is going on.…Arpwatch is something that you can simply configure…and as you can see it keeps track…of ethernet IP address pairing.…