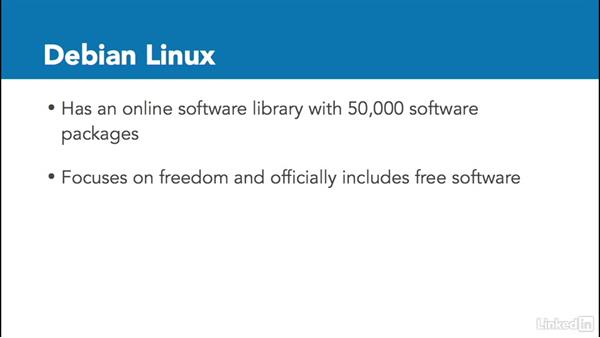 In this video Grant discusses what a Linux distribution is and outlines the two major branches: Redhat and Debian. He then discusses the differences to simplify choosing one.

- [Narrator] A Linux Distribution is a Linux Kernel, with supporting drivers, tools and applications combined to make a working operating system in a distributable format. These days most distributions come on an ISO image designed to be burned to an optical disc or loaded on a flash drive. One place to find out more about various Linux distributions is DistroWatch.com. DistroWatch.com lists several hundred different distributions of Linux. If you scroll down a bit, on the right-hand side you'll see a box labelled Page Hit Ranking with a list of distributions and their popularity.

Debian was one of the earliest distributions and was created by Ian Murdock. His wife's name was Debra, so he combined their names and released Debian in December of 1993. Debian is maintained by a community and isn't associated with any corporation. The Debian maintainers practice a democratic social structure and project leaders are elected. Debian has one of the largest online software compilations known, with around 50,000 software packages comprised of about 320 million lines of code.

Popular distributions based on Red Hat are CentOS, Fedora, and Mandriva. Red Hat Linux was one of the earliest commercial distributions and was released in November of 1994. In 1999, Red Hat went public, achieving the eighth biggest first-day gain in the history of Wall Street. In 2012, Red Hat became the first open-source company to break 1 billion dollars in revenue, and they've done very well ever since. The package management system used by Red Hat is RPM, or Red Hat Package Manager.

Red Hat has the majority of the commercial Linux server market. There are also nonstandard versions of Linux. These are technically Linux distributions, but are not easy to install. If you want to experience these, you might try installing the Software Development K, or SDKs, to see how they work. But we won't be covering them in this course. Red Hat Linux has the majority of corporate Linux server installations, thus the majority of Linux server jobs require Red Hat Linux knowledge. Since Red Hat is so popular amongst employers, we'll use the free version of it, CentOS, for this course, as it's nearly identical.

CentOS is stable and secure, and it's free to download. According to the founder of CentOS Linux, it is pronounced Centos, but you may also hear it as Centos, or Cent O-S, as well. They all refer to the same thing. For this course, we will be focusing on CentOS, but I encourage you to explore some of the other amazing distributions on your own.

10/30/2016
Join the Linux revolution. Learn why this open-source operating system is taking over the world. This course covers an overview and basic implementation of CentOS 7, a community-driven server operating system that makes a great introduction to enterprise Linux. Grant McWilliams helps you configure VirtualBox on your local machine, and covers the basics of network configuration, initial software installation, and postinstallation configuration of CentOS, including working with GNOME 3, an open-source desktop environment that makes Linux as easy to run as Mac or Windows. These lessons are the foundation for learning Linux system administration, and critical for getting a CentOS deployment up and running.
Topics include: