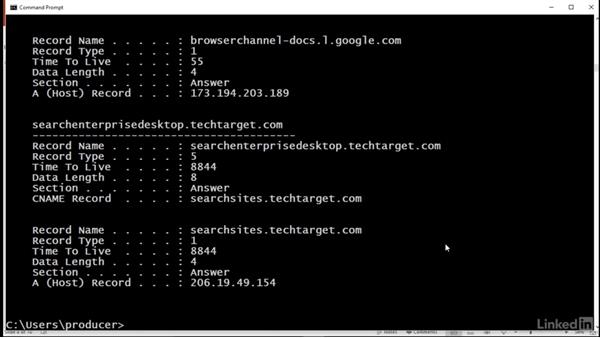 Lisa Bock covers cache poisoning, which inserts bogus information into a DNS server’s cache with the goal of diverting traffic to the attacker's computer.

- [Instructor] Networks rely on DNS…to provide accurate information…on host name to IP address resolution.…If I want to go to a web page,…I rely on DNS to give me the correct address,…or else I might be redirected to a bogus site.…The same is with email, if an email server address…is incorrect, I'll get a bounce back…with a message that the server cannot be found.…When configuring a DNS server,…correct configuration is essential,…as a mis-configuration can lead to devastating problems.…

DNS can be compromised by poisoning the cache.…Cache is a temporary holding area for data.…It's designed so that devices that request…a response can get a quicker response.…Websites use caching so we can get…a quicker response when requesting a web page.…On our own system we have a cache of DNS records.…Let's take a look.…I'm at the command line interface,…and once in the command line interface,…I'll type in ipconfig /displaydns.…There are a lot of records in my DNS cache, as you can see.…

What you can see is Record Name, Record Type,…