Understanding the interaction of Lightroom's histogram and tone panels 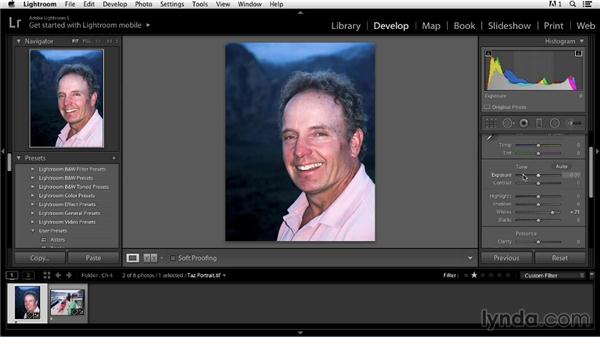 Join Taz Tally for an in-depth discussion in this video Understanding the interaction of Lightroom's histogram and tone panels, part of Lightroom: Color Correction.

In this movie, I'd like to talk about how we can start integrating Lightroom's tools and use them together to help us do far more sophisticated and complete analysis leading to correction of images. In this case, I'd like to talk specifically about how the histograms are related to the tonal adjustment tools. So first, we're going to select two images. And let's select this portrait image then hold down the Cmd or Ctrl key and select the kayak images. And let me just press the one key to assign those one stars, as you see here.

And we'll go to attributes and just turn on the one star. As you see there. To clean up the screen view so we just work from the two images. And then let's go ahead and select the kayak image and let's go to the develop module. By pressing D, we're clicking on the develop module up here and if you remember from earlier discussions this is a image that has a pretty good distribution of tonal range, all the way from near highlight all the way down to the near deep shadow. And what I want to do is use this image and the portrait image to show you how the tonal adjustment tools work together with the histogram.

The first thing is let's rotate my tonal tools up. This is where we're going to be talking about, right here. Predominately it's exposure, contrast, hIghlights, shadows, whites and blacks. Now many people when they move into light room they start doing adjustments they immediately go into exposure. And sometimes that's appropriate. But a lot of times it's not. And let me show you why. By demonstrating the difference between these two images and how the histogram and these various tonal adjustments work together. When we look at a image like this that has a fairly wide range of tonal distribution.

This is why people just use the exposure. And that's why I wanted to show you this image. An image that has a pretty good distribution of tonal values across the entire image. It's less obvious till you understand the difference. Between how these various adjustments and the histogram work. So, I wanted to show you that and then let's skip over to the portrait image. Notice this has a much more restricted tonal range distribution as we discussed earlier. And using an image like this we can really see how the histogram and these tonal adjustments work together.

First, let's start with the exposure adjustment and we're not talking about color adjustment here just tone. If we go to the exposure and we move that to the right notice everything moves over to the right. Everything moves kind of evenly. We're moving all the tone values in the image. And by the way, if you move one of these sliders and you want to bring it back to zero, you don't have to slide it and try to get right back to zero. You can just double click on it. And fact is if you make any tonal adjustments at all to an image, you can just double click on tone and return all of them to the original. So, notice that the exposure moves everything over, double click to return it.

Let me show you what the whites do. When you come down here to whites, remember that the whites are the very lightest portion of the histogram. We take whites and we move this over. Notice how far less of the total package of data moves. Let's look at exposures here. Exposure moves everything. Primarily the white end, the very far end that moves the most. Notice the difference between these two adjustments, let's return this to zero and let's drag the exposure. Look at the difference in this area of the histogram here. And, look at the difference in the background in this image.

When we got to exposure, and we move this over, it lightens up the whole image, including the background. Double-click to return to zero. But, when we do the white and we move this over, notice that we're highlighting the foreground, the lighter portion of the image, but the background, darker portion of the image, remains much darker than the foreground. This is a far more appropriate adjustment for this image. Using the whites than using the exposure, which lightens everything. Particularly since it's a portrait. There's the difference between the two, which you can isolate various portions of your tonal range by using the whites, the shadows, and the highlights.

Then we go to the highlights. We can fine-tune and make the highlight portion even lighter, and actually it darkens up the background. Notice as I'm going back and forth, we're taking and pushing more of the data into the highlight area, and moving more of the data to the shadow. We're actually increasing contrast by moving the highlights. And when we do the shadows, it's the same thing. It's when we go to blacks, it primarily moves the darkest portion of the image. When we move shadows, it moves primarily the three-quarter tones.

It's less obvious here because this image was so dark to begin with, but it works exactly the same way as the whites and the highlights. If you have data piled all the way down here. Whether you use the exposure or the whites makes an enormous difference as to what happens to the overall tonal distribution of the image. And of course, what contrast does, is makes the lighter portions of the image lighter, and the darker portions of the image darker. And notice, that this lightens the shadows and darkens the highlights, reducing overall contrast.

So it's really good to relate these various adjustments that you see down here to what's going on in the histogram. Now, let's just return them all to normal and let's just review. The exposure moves everything over and honestly I rarely start with exposure, I'm typically working with one of these down here. And more often than not I start with my whites, cause I want to get my highlights set first. And then, I'll often move to the highlights slider which kind of fine tunes the lighter portion of the image, then I'll go my shadows and or blacks to get those the way I want them set, and then if I want to adjust overall brightness.

I may go to exposure a little bit, and or I may go to contrast, to increase or decrease the overall contrast in the image. With something like a portrait here I'm typically likely to decrease contrast just a little bit. And then you can fine tune. You know, after you make some adjustments here you can come back to the blacks and make them a little bit darker if you want to after you've adjusted the overall contrast. But where you start in this adjustment really depends upon what the initial tonal distribution is in your image, again double click on tone to return everything to normal.

Because all the data was piled up down here and it's a portrait. And this is the lighter portion of the image, absolutely appropriate to start with the highlights. And one more thing to notice is that if we started with highlights instead of just the whites. It lightens that foreground, but we can't take it all the way over, like we can with the whites. Which is why I rarely begin with the highlight slider, almost always start with the whites, because that allows me to set the very brightest pixels in the image first, and then I may fine tune back up here. And if it's a high key image, I'm working on the dark end, then I do the same thing there.

I'll start with black and then go to shadows. And then I may fine tune bit exposure and contrast. But there's a lot of images where I never touched the exposure. Do all my tonal adjustments right down here. And let's just turn this off an done more thing to cover. You may have noticed that when I'm dragging my whites over here this portion of the histogram lights up, watch this. When I click here, do you see how that lights up? Whereas if I drag on my highlights, do you see the highlights is a little bit lighter shade of gray? When I go to exposure, it lights up the mid-tones.

When I go to shadows, it lights up the three-quarter tone. When I go to blacks, it's the deep shadow. It's showing you that each of these is linked to a various portions of the tonal range. And in fact, you can indeed just click on the whites portion, and just drag your mouse, you don't even have to go to the slider. Watch the white slider down here, see it's moving the white slider. So I can actually click on the histogram, and drag it if I want to. If I click on the mid tone in here, it, just like dragging the exposures slider.

So pay attention to your histogram, allow your histogram to be your guide as to where you start doing your adjustments, and I think you'll find that more often than not. You're going to begin your adjustments down here on the whites and the blacks and not use your exposure adjustment nearly as much as you may have in the past.

5/30/2014
Lightroom is a great choice for color correction. In this course, photographer and educator Taz Tally details the concepts, tools, and techniques behind correcting and enhancing color in Lightroom. Learn to evaluate the color in an image with the Develop module tools, Lightroom's histograms, and (crucially) your own eyes. Then discover how to use the color correction tools to balance and tone adjust an image, using tried and true techniques like neutralization and color ratios. Taz then takes you through a variety of color correction scenarios, from improving landscapes, fixing skin tones, and recovering faded images to making product shots pop, removing color casts, and making creative color adjustments.
Topics include:

Video: Understanding the interaction of Lightroom's histogram and tone panels