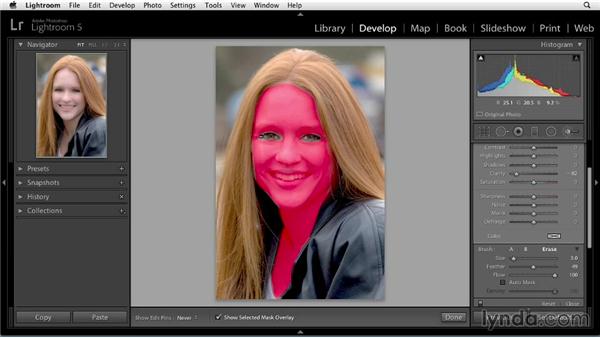 Join Jan Kabili for an in-depth discussion in this video Softening skin, part of Enhancing a Portrait of a Young Woman in Lightroom.

The next step is going to have a significant effect on the appearance of the model's skin. I'm going to soften the skin and even out the skin tones by using the adjustment brush tool with a negative clarity effect. I'll leave the image set to fit on Screen View for this, and I'll go up to the adjustment brush tool and select it in the toolbar under the histogram. And then I'm going to set all of its settings back to zero. By holding down the Option key, that's the Alt key on the PC, to change the effect label to a reset label, and then I'll click reset. I know that I want to reduce the clarity, so I'll take the clarity slider, and I'll drag it to the left.

I can always fine tune the amount of clarity reduction later. Down at the bottom of the screen I'm going to make sure that Show Selected Mask Overlay has a check mark next to it. So that I can see the mask that I'm painting as I define the area that's going to be affected by this clarity reduction. Now you don't have to have the mask showing, but I find it easier to paint over her skin without adding in other areas by mistake. If I leave the mask showing. So I'll do that, and then I'll move into the image and I'll start painting. And you can see the red area that indicates the mask that defines where this correction is going to be applied to the image.

Now, I see that my brush tip is a little bit too feathered. So I'm going to move down to the bottom of the panel, and I'm going to reduce the feather on the brush tip to about 50, and that will help me to stay just on top of her skin. And I'm also going to check auto mask, and that will do the same thing. And then I'll move into the image. I'm going to make my brush tip a bit smaller now, by pressing the left bracket key. And that's the way that I like to size the brush on the fly as I'm painting, so that I can make it even smaller, or make the brush tip bigger to fill in the area in the middle.

Now notice that I have two pins on this model's face. The white pin is the one that I used earlier in the course when I was reducing the puffiness of her eyes. So it's this black selected pin that we're working with now, to paint the area of the mask. Now, I want to eliminate the parts of her face that I want to keep sharp from this mask. So, i'm going to hold down the Option key. That's the Alt key on the PC, to change my brush to the erase brush. My erase brush happens to be really small right now. So with the Option or Alt key still held down, I'll press the right bracket key a few times to make the erase brush bigger.

You know this is the erase brush because it has a minus symbol in the center of it. And then I'm going to click and drag over her eyes to remove those from the mask. I'll come down and drag over her mouth Her teeth, her lips, and I don't have to do too perfect a job. Now I'm going to turn the mask off, so that I can see her eyebrows better, because I want to eliminate those from the mask as well. And I can't see them with a red overlay. So uncheck shows selected mask overlay. Over her eyebrows, I'll hold down the Option key or the Alt key on the PC.

I'm going to make the brush tip a little smaller, and it's still the eraser brush, so I'm erasing the mask from over her eyebrows here, and here. And I'm going to do the same over her nostrils, making the brush really small and just quickly dragging over her nostril. I'm still holding down the Option or Alt key to make sure this is an eraser brush. Now let's take a look at the mask by showing the selected mask overlay, and that looks like what I want, so I'll uncheck that. Now, remember, I had already turned the clarity down on this brush.

I'll click the done button to close the adjustment brush panel, and I do want to check things out by zooming in, so I'll click on the model's face, and I'll drag around, and. I'm pretty satisfied with that softening effect, and you can see that it's also helped blend in the changes that we made to the under eye circles as well. I'll click again to zoom back to the fit on screen view, and as I've been doing throughout the retouching workflow. I like to make snapshots so I can quickly get back to specific stages in my workflow if I need to. So I'll click the plus symbol on the snapshots panel, and I'll name this snapshot skin soften.

And to compare a before and after view with all the changes that I've made so far with the way the image looked just after I cropped it, I'll press the backslash key on my keyboard. That's before. And that's after. Quite a difference. This adjustment has evened out the skin tone quite a bit. I want to add back in a little more contour, and that's what I'm going to do in the next movie.

11/13/2013
When you're starting with a beautiful subject, you already have the makings of a great photograph. Lightroom allows you to make subtle image adjustments that take it to the next level. Learn how to enhance a portrait of a young woman in this short start-to-finish retouching project with lynda.com author Jan Kabili. Jan will show you how to optimize tone and color, hide blemishes, brighten eyes, whiten teeth, add contour, and enhance hair.
Topics include: