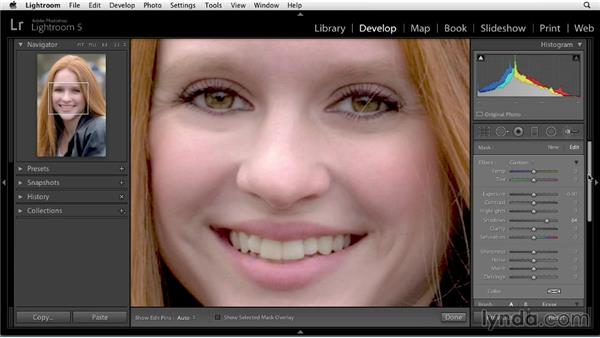 Join Jan Kabili for an in-depth discussion in this video Reducing circles under eyes, part of Enhancing a Portrait of a Young Woman in Lightroom.

Now let's tackle the circles under the model's eyes. I don't want to delete those completely, because then I think the model will look too plastic. So, I'm just going to try to reduce them. And to do that I'm going to use a combination of tools, the Spot Removal tool and the Adjustment Brush tool. I'll start by zooming into the model, clicking on the image. And then I'm going to get the Spot Removal tool from the Toolbar. And in its panel, I'll make sure that the tool is set to heal, and I'm going to reduce the opacity of the spot removal tool slightly. So that I don't get too strong of an effect here, and then I'll move into the image.

As I do, you can see the icons come up that represent all of the other adjustments that I've made with the Spot Removal tool earlier in the course. We can ignore those for now. I'll move over the circle under the model's right eye and I've got my brush tip just a little bit bigger than that circle. And then I'll click and I'll drag over the circle under her eye. The tool chose to use the area under her left eye as the source. If that turns out not to be the best choice, I can always move that by moving my cursor inside of the source area and dragging it.

To see if that works well, I'm going to move my cursor outside of the image. And I think that's a pretty good start, I'll do the same thing with the puffy circle under the model's left eye. Clicking and dragging over it, and then moving my cursor away to see the result. Now, as you can see there's still some dark shadow under both eyes, to try to reduce that I'm going to use the adjustment brush tool. So I'll go back to the toolbar. And I'll click on the adjustment brush tool.

And that will close the spot removal panel, and it will open a different panel, a panel with lots of different settings that I can apply to a correction that I make with the adjustment brush tool. I can use a combination of settings here, or just a single setting. But the first step is to set everything back to its default of zero. To do that, I'm going to move my cursor over this effect label, hold down the Option key, that's the Alt key on a PC. And it changes to a reset button. So I click Reset and now you can see that all the sliders have gone back to zero. Now since I'm trying to reduce the shadows under the models eye, I'm going to drag the shadows slider to the right.

If I want to add any other effects to this correction later I can do so. For example, in some cases, I might increase the exposure, too, but I'll start with just the simple reduction of shadows, and then I'm going to scroll down and take a look at the Brush Settings. It's important that I have Feather set all the way to the right because I want to use a big soft brush for this purpose, and for the same reason I'll leave Auto Mask unchecked. I'll leave Flow at 100, I'm actually going to turn the Density down a little bit. Because I'm not trying to completely eliminate the circles under her eyes, but just reduce them, and I don't want too strong an effect.

Then I'll move into the image and I'll start with the left eye, and I'm going to click and drag over that area under her eye. Now, you can see that there's a black pin that represents that correction. Whenever I have the adjustment brush tool selected, I'll have the option to select that black pin and then I can edit this adjustment. So for example, I think I need a little more shadow reduction, so I'm going to come back down. To the adjustment brush sliders, and I'm going to increase the shadow slider dragging it further to the right.

And keeping that same setting, I'm going to add to this adjustment brush correction to include the area under the model's left eye with my paint black which means it's selected. I'll click and drag over the area under a model's left eye. Reducing the shadow there. And when I move my cursor out of the image, the pin goes away so I can see how the image looks. I think that's a pretty good start. And I think I'll be able to blend this correction in with the rest of the skin as I continue to work on and soften the rest of the model's skin in later movies. Now just to see how far we've come, I'm going to press the back slash key.

So you can see the tones and colors in the model's face when I started this retouch process. And how the model looks now with these changes. And if I want to see just the effect of my adjustment brush changes, then I'll go down to the bottom of this panel. And I'll click the toggle switch there, which toggles just the adjustment brush changes off and then on. I'm want to show you just a little bit more about how the adjustment brush tool works so that you can edit your corrections later if you need to. So, let's say that I make an error and I happen to use the same correction painting over her hair.

Now, the reason I did this is, I wanted to show you how I can delete an area from a pin that you don't want included in the correction. With the selected mask overlay showing, or even if I turn it off, either way, I'll hold down the Option key, that's the Alt key on the PC. And that changes my brush to an eraser brush. With that key held down, I can use the left bracket keys to make the eraser smaller, the right bracket keys to make it bigger, and then I'll just move over the area that I want to eliminate from this correction and erase it.

And if I come down and uncheck show selected mask overlay, notice that in the area the shadows are still lighter. I still can erase even without the red marks showing. Again, by holding the Option key, the Alt key in the PC, to get the eraser brush and clicking and dragging over the rest of the area that I don't want to include in my correction. And if I want to add additional area to this particular correction, then I would just click and drag with the tool, without holding the Option or Alt modify keys. I'm satisfied with that correction so I'm going to add another snapshot so that I can get back to this state in the future if I need to by going to the snapshots panel and clicking the plus symbol there.

11/13/2013
When you're starting with a beautiful subject, you already have the makings of a great photograph. Lightroom allows you to make subtle image adjustments that take it to the next level. Learn how to enhance a portrait of a young woman in this short start-to-finish retouching project with lynda.com author Jan Kabili. Jan will show you how to optimize tone and color, hide blemishes, brighten eyes, whiten teeth, add contour, and enhance hair.
Topics include: