Merging two landscapes into a panorama 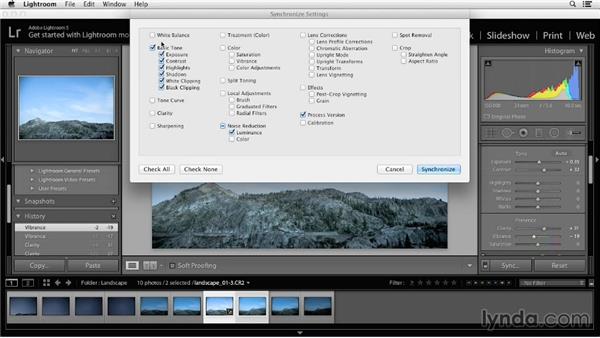 For processing the landscape or the cityscape scene, the first step is to apply overall adjustments to the raw files in light room or camera raw that address overall brightness, contrast and color balance of the scene. Additional modifications like increasing the clarity a bit can also help improve detail definition in some landscape images. If you chose to create two overlapping shots of your landscape scene to expand the amounts of the scene for the landscape image, these can be easily merged using Photoshop's merge to panoramic feature, so what we're going to do here is make some adjustments to the landscape images, and let's just take a look at the different landscapes that I have here.

These are all the same location just two different shots of the same location and multiple exposures. So this shot is eight seconds at F56 ISO 800. Here is doubling that exposure to 15 seconds and then to 30 seconds and the general exposure of F56 at ISO 800 stays the same and then we have another shot here which is just the continuation of that landscape scene. With the idea of merging these together as a panorama.

It might seem more natural to use one of these darker images since obviously we are trying to create the look of a night composite and these ph, photographs were all taken at night. Just shortly after the sun went down, but in this case I'm going to use the brighter images just because it gives us a little bit more latitude in case we choose to include some of the detail on the faces of the rock here. So those are the two that I'm going to choose. I'm going to start with this shot here and I'm going to make some initial adjustments, so I'll pop over to the develop module, and I'm just going to adjust the brightness and the contrast a little bit.

I want to increase the contrast a bit, and bring the exposure up just a bit, and I'm going to bring the clarity up. Actually, let's zoom in to 100% here to go and see what the face of this rock looks like here, so we can see what the clarity does to it. And you can see that the clarity essential increasing the mid tone contrast. So Lightroom's looking wherever there's contrast edge and it's increasing the contrast along that edge there. So, that looks pretty good. Clarity is an adjustment that is tempting to go too far on because it just kind of looks really good to make things look really nice and sharp and distinct so you just kind of have to resist that urge to go too much on the clarity because it is easy to go overboard on that adjustment.

So, I'm just going to bring that saturation, that vibrance down to about minus 19 or 20. So that's a good overall adjustment here on this image. I'm not trying to make it look really dark, like a night scene, at this point in time. The main reason for that is I still need to create an accurate mask for the sky area, and that is something that's going to happen in Photoshop, and in order to make that process easier and more efficient I want to preserve a good contrast edge between the mountain and the sky.

So I want to be able to see a lot of good detail there so I can take advantage of that when I make the mask. So we're going to do most of the. The true kind of night flavoring later once we get this into Photoshop. So I've adjusted this image here, I'm going to select the image next to it which has the same exposure by holding on the command key on Mac or the control key on Windows to select that other thumbnail, and I'm going to choose the sink button here,. Now I want to synchronize all the settings that I've made. In this case, I really only made settings using the basic tone adjustments.

So as long as all of those are checked, that's okay. I do want to make sure that the clarity is checked because I have applied some clarity, and let's just also do the color saturation and vibrant. So that is now going to apply those settings to both files now they're synchronized and they have the same look. So now, we're ready to take these into Photoshop and combine them as a panorama using the Merge to Panorama feature. Fortunately, there's a really easy way we can do that from within Lightroom. And by the way, if you're using bridge, you can also do it from within bridge using the tools menu in bridge if you go down to Photoshop, you'll see that there's the same shortcut for merging to a panorama in Photoshop. In light room, I'm going to go to the photo menu, choose edit in. Merge to panorama info in Photoshop. Okay, now we're in Photoshop and we have the photo merge dialogue. We have a choice of what the layout method is, we can choose auto or any of these other methods. I'm going to choose cylindrical because based on experience, I know that that works with these type of images, but I will explain why I'm making that choice once I have the cylindrical panorama created. I'm going to choose the vignette removal there. And we'll just click okay. All right. So here is our completed panorama using the cylindrical method. And what I want to do is compare the other method that you are presented with at the top of the merge to panorama dialogue, which is the perspective method. So here's the same scene that was merged using the perspective method. And if you leave the merge to panorama layout method set to auto, this is likely what you're going to get most of the time. So it's trying to incorporate the idea that, you know, one side of the image is physically closer than the other side, so it's trying to create that sort of perspective warp on that. The problem with that is that. You'll notice if we zoom up close to look at that is that the trees are tilted and slanting inward here whereas in the cylindrical version they're not. They're much more, you know straight up and down looking better, so in, in most cases if the landscape is sort an equal distance away from you and you're not wrapping around to something that's much closer to you choosing the cylindrical method is going to be a much better choice. All right, so what we're going to do now is crop this image, we're going to merge the layers together, if you're curious about the masks that Photoshop makes, you can see it's making these very precise masks. You can go in to check it out to see if there are any issues with the masks that it has made. You can try to find those edges there and turn those layers on and off. In the old days that was more of an issue when merged panorama was first introduced in Photoshop, but these days it's so good I rarely even worry about it. So I'm just going to go up to the layer menu and I'm going to choose to merge the visible layers, and then I'm going to get the crop tool and I'm just going to use a regular ratio here, I'm not going to set any ratio. I'm just going to manually pull in a crop, and I may not use all of this landscape, but. I've got it if I need it.

I'm not going to worry about the sky at all because I'm going to replace the sky with another sky. So all we have to worry about, press the enter key to apply the crop, and now we're done and ready to move on to the next step. Oh it looks like I missed a spot in my crop here. So let me just come down here and bring that up. Here's a little trick for you if you find it snapping to the bottom edge of the picture when you're really close like that. If you hold the control key down after you have started to drag on the crop box, it allows you to drag it with a little more precision, alright there we go. The landscape images have now had some initial adjustments applied in Lightroom or camera raw and if necessary the two images have been merged together into a single one using the merged panorama feature in Photoshop

8/29/2014
A lunar eclipse is a relatively common astronomical event that always brings out the cameras and the long telephoto lenses. But the next time a lunar eclipse comes around, go beyond just taking a close-up of a darkened moon. Create a composite that shows the phases of the eclipse—and better still, shows the composite in the context of the landscape underneath it.

That's what photographer and educator Seán Duggan did, and in this course, he deconstructs his photographic steps and post-processing procedures.

The course begins with advice on how to plan and photograph the eclipse, with the right gear, the right focusing techniques, and the right exposure. Next, Seán evaluates the images in Lightroom, and then dives into Photoshop and shows how to composite each image into a finished photo. Along the way, he explores blend modes, layer masking, and other compositing techniques.