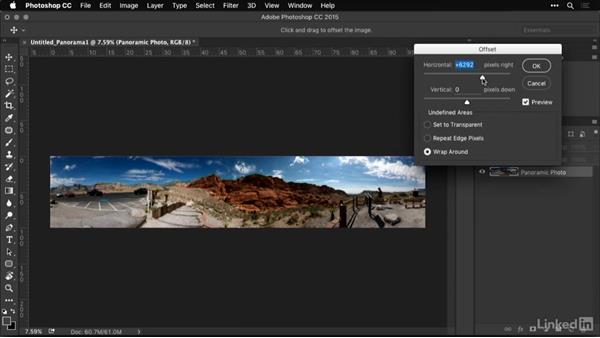 - Let's take a look at one of my favorite styles of panoramic photography, 360 degree panoramic images. These images are really cool because they have lots of uses. Sometimes people will use them as environmental maps for 3D animation, maybe an after effects to put a little bit of tint on a logo when you're animating it. Multi-media folks use it and we're seeing a resurgence in things like Adobe's digital publishing suite, where people drop in panoramic images so you can have an interactive experience as you look around an environment. In any case, a 360 degree panorama is very cool.

There was no substantial differences in the shooting. Just that we shot a full 360 degree arch. What I'd like to show you is how you put these images together and then we'll take a look at a couple of post processing options outside of the Adobe suite to really take it a bit further. Let's step into the jpegs here and select all of them. In this case, there's 24 images which means that that I rotated the camera about 15 degrees each time to create the 360. If we take a look at this as a slideshow, you can clearly see how we panned and moved through the environment.

And there's a substantial amount of overlap. Remember we covered this a bit during the production stage but it's very important that you keep the camera vertical to minimize distortion. With all the images selected, you can choose tools, photoshop, photo merge. This will load them all in. This is one of those instances where I'm going to choose cylindrical because I shot a single row but I did take it in a full 360.

I'll choose to blend the images together but skip the geometric distortion correction. Let's click okay to invoke the command. Now these images have been downsized a bit so they should load relatively quickly. And what's going to happen is you will end up with a full 360 degree file. There's the image and you see it did a pretty nice job of blending it together. Now the challenge is that we need the left edge and the right edge to line up. You'll notice right here, for example, this truck on the left edge is actually the same truck over here.

So because we had overlap in our panoramic image, it's actually a little bit more than 360 degrees right now. Let's merge these together but in order to do this, I'll actually take advantage of an action that I've written. You'll find the action available in the folder. You can double click to load it. It's also available on my personal blog at richardharrington.com, you can search for 360 degree photoshop pano. But its here for download if you have access to the exercise files.

This action is meant to save you time. Essentially what's gonna happen here is it's gonna take the panoramic image, which is really large, split it in the middle and then pull those pieces to the opposite ends. And then where the middle overlaps, it's gonna use auto align to figure that out and seamlessly blend together. Sounds more complex than it is but it's really pretty straightforward. Let's see how it works, I'll now choose to bring up my actions panel and since I double clicked on that action, it should've loaded.

You'll see one here called seamless loop. And it does many different steps. What it's going to do is basically take the layers, merge them together, adjust the canvas size and decide to create a split in the middle. It'll then overlap the edges and then invite you to recrop. Let's run this, you'll see that it runs through all of the steps pretty quickly, creates the merge layer and the overlap and I can now click continue.

If you look at this, it's pretty close. I'm gonna do a little cropping from top to bottom. But don't crop left to right. Remove any issues at the top or bottom of the frame or invoke content to where fill. That looks pretty good, what I want to do now is check that things are lining up. It may be difficult to precisely see where that loop occurred, but there's an easy filter inside of photoshop called the offset filter that you can use to preview. So I can choose filter, other and use the offset filter.

This will allow me to shift the image left to right. And what I can see here is a simulation of moving through the environment and it looks like everything lines up. We've got our field here, we've got the background there with the mountains and everything is quite seamless. So I'll click cancel, at this point, we've created a 360 degree loop. Photoshop, though, does not have the ability to turn that into a multi media piece.

Now inside of the bridge folder, you'll see that I put a couple of other items here. I've output, this, for example, let's open up this old version here using the original quicktime player, quicktime version seven. If you have that installed, you'll note that this is now an interactive movie and we can drag around through it. I can also start to zoom in to explore details.

And take a look in this environment. This would work well for a virtual tour, giving me the ability to allow people to explore my panoramic photo interactively. You can see it here and its quite cool. The older version of quicktime had the ability to play back these movies. Unfortunately, it doesn't have the ability to author them. To do that, you'll need to turn to another application. So let's take a quick look at one of those and how you can actually use these to create an interactive 360 degree pano.

Now that that's saved out, you have several other options. You could bring it into a 3D tool or take it over into a dedicated app for doing the specialty 360 degree VR movies. I'm gonna use an application here called pano2vr. There are several of these types of applications on the market but this one is available from Garden Gnome Software, you're welcome to check them out. And they do make this available for mac, windows and linux so you can actually get this for just about any major operating system out there.

Okay, I've got the application open and it's pretty simple, I just need to select my input, the image that I want to bring in. I'll choose open and navigate to the files that I downloaded. You're welcome to use the image that you just created in photoshop or take the one that I've already merged together here and click okay. And it loads it, let's adjust the viewing perimeters here a bit and let's adjust the field of view down here.

There we go, we'll adjust and we can now set the north point and we'll set this initial view here, that looks good. Let's go ahead and output to quicktime for now. We could adjust the size of the player. I'll go with the 360, so 640 by 360, a nice wide screen view. We'll do a normal quality on the motion with a max quality for static, everything looks good there. I can also write an html 5 page if I wanted.

Let's choose where we're gonna write that to. Now the html page may not load the quicktime plug in. But here it is, let's double click that. And there's my quicktime movie. Now let's tweak that a little further. We can come into the settings here. I'll go with the 360 this time. Normal quality, max, everything looks good.

Click okay and make the file and let's just check on the desktop to see the results. There is is, there's my wide screen movie. Notice shift key will zoom me in. Control key will zoom me out. And this makes it very easy to build the interactive panoramic photo. So very cool stuff and there are many other solutions out there. If you want to explore other uses for the 360 pano, there's lots of software tools out there, just look for virtual reality or 360vr plus here on linkedin.com I have tutorials where I use these images with chrome key backgrounds for video works as virtual sets.

So lots of cool things that you could try out.

8/18/2016
When one photo doesn't do justice to a scene, take several—and then stitch them together them into a panorama. In this course, Rich Harrington details every step in the panoramic photography process, from shooting to post-processing.

The course begins with a look at the concepts and technical details for getting great shots: how to choose a shooting format and size, how to properly mount the camera on a tripod, how to overlap each shot, which lenses deliver best results, and more. Plus, learn about optional hardware like the GigaPan system and sliders, and a variety of mobile apps for capturing 360-degree panoramas with an iPhone. After shooting a variety of panoramas, Rich processes them using various software tools, from Lightroom to Adobe Camera Raw and Photoshop. The course concludes with advice on refining stitched panoramas and on saving them for a variety of destinations, from print to the web.
Topics include: