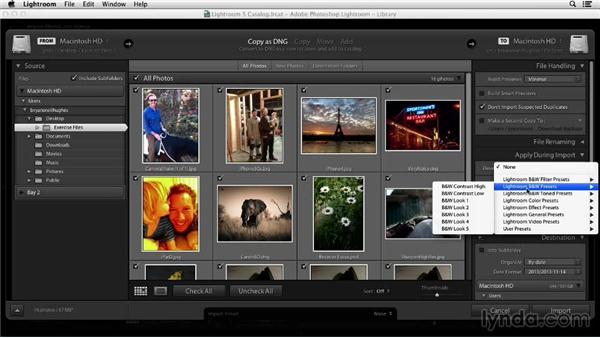 Join Bryan O'Neil Hughes for an in-depth discussion in this video Maximizing quality during import, part of Lightroom and Photoshop: Noise Reduction and Sharpening.

So here we are in Lightroom, and we're going to import all of our exercise files, and we'll be using Lightroom's library for all of the exercises. We'll be throwing files to Photoshop from here later. And what's nice about this if I come in here and import, we're going to be able to hold on to the sub-folders as well. So, I'll just pull all these in. Look over those. Now, this is a good point to say that if you're bringing in your own images, do a first pass on the LCD on your camera. There are sort of multiple waves of culling your images. One happens on the camera, and then the other one happens on your way into Lightroom.

And then another one still once the images are actually in Lightroom. And the whole idea is to try to save yourself some time. Now, a couple things to be aware of while we're in here. If you want, this is a great place to back up copies to another location and you can do that right over here. I mark this as, Copy as DNG, and I just leave that on. What that does is it makes sure that all of the raw files are converted to DNGs. It's going to make them smaller. It's going to package all the edits together. And they're going to transport a lot better. Which is to say the operating system can preview them.

And I can hand them off to other programs without any problem. Now, these raw files are already DNGs, so you don't need to worry about that. But I would go ahead and leave that as, Copy as DNG. The last thing I'll point out there, and this'll be more important later. Is that we can apply presets on our way in here. So once you've created some presets that you like, a great way to save time is to just apply them on the way in. If you're shooting in controlled lighting or studio lighting, I highly recommend making a general preset and applying that on the way in here.

So with all that said, let's go ahead and import these in. Okay, it's told me that the non raw files were not converted and I notice, if I come over here to the left hand side, that I've got all of my folders over here showing the dates that these were taken. And I've got all of my files in here as well, and I can either work from Lightroom or I can work directly from the folder in Photoshop. In fact, later in Photoshop, we'll do a blend of using Lightroom, but we'll also use Bridge a little bit in case that's the workflow that you use. The other thing that I'll say is if you're wanting to look at your images and decide which ones are which, I like to use a star ranking method and to do that I'll see the image full screen.

I'll go into either a semi-lights out or completely dark using the L key, and then I'll just move through these, and I'll give them number five for five stars, maybe number four for four. You could also do a P to flag it. Or you can use any of the variety of different colors and this is going to help you later when you look over things. I'm going to hit G, to see everything in a grid. And then if I want to compare between a couple of files. Say I want to look at just these files. I can go into a comparison mode, and see those.

And one of the things I like to do here, is get rid of as much of the interface as possible. And as I'm getting rid of these, the other images will grow larger. So, take the time to look at them up front and you're going to save yourself a lot of time editing later on. 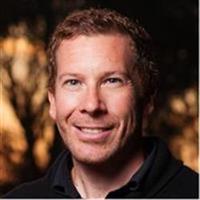 2/7/2014
Digital photos shot at high ISO speeds often suffer from noise. And all digital photos have a slight softness due to the nature of imaging sensors. Like all imaging software, Adobe Lightroom and Photoshop have features for fixing these flaws. But using these features isn't always straightforward—and incorrect use of them can make a photo look artificial and overprocessed.

In this course, join Photoshop senior product manager Bryan O'Neil Hughes for an in-depth exploration of the noise-reduction and sharpening features in Lightroom and Photoshop. The course begins with tips for getting the cleanest possible images when you shoot. Next, Bryan details the process of making overall noise and sharpness improvements in Lightroom. The course concludes with a look at various advanced Photoshop techniques for localized adjustments and more.