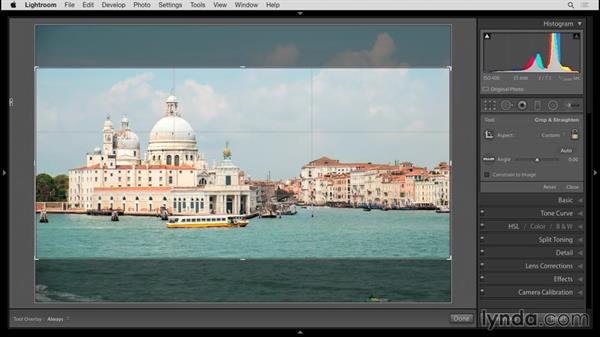 Join Jan Kabili for an in-depth discussion in this video Cropping, part of Learning Lightroom 6 and Lightroom Classic CC.

- [Voiceover] Cropping is a useful way to improve the composition of a photo, to remove unwanted content at the edges of a photo, or to just change the aspect ratio of a photo to fit your output requirements. In this case I'd like to eliminate the dark vignetting at the left corners of the image and some of the distracting content down here at the bottom of the photo. I'm going to close the film strip to give myself more room to work. To access the crop tool in the develop module I can either go to the tool strip and click on the crop tool here, or I could just press "r" on my keyboard, from here in the develop module or from any module.

You may have noticed that as I changed the size of the bounding box, it stayed in the same aspect ratio of height to width. That happens to be a 2x3 aspect ratio because that's the aspect ratio that my camera used to shoot the photo. I don't have to use a crop that's the same ratio as the original photo. I can change that if I want by going over to the crop and straighten panel and using this drop-down menu. Here I can choose from a number of other common aspect ratios, like 5x7 or 4x3 or 16x9.

Let's give that one a try. That's a kind of a panoramic aspect ratio that sometimes looks good on landscape photos. If I don't care about maintaining any particular aspect ratio, I can unlock the little lock here in the crop and straighten panel by clicking on the lock. Now, when I drag any of the edges, only that edge moves and I have complete freedom to fashion the bounding box as I would like it to be. You've probably noticed that their is a faint overlay inside of the crop bounding box.

That's known as the crop overlay, and it's purpose is to suggest compositional rules that may help you to improve the composition of the photo as you crop. The default crop overlay is the one you see here. It's called the Rule of Thirds. The idea of the Rule of Thirds is that by placing the most interesting parts of the image at the intersections of these faint horizontal and vertical lines, you'll improve the composition. This isn't true for every photo. You might try another crop overlay if you don't like this one on a particular photo.

You can cycle through a number of different crop overlays that come with the program by pressing the "o" key on the keyboard. Here's another crop overlay with intersections of diagonal lines, another, and so forth. If you don't want to see the crop overlay at all, you can come down to the tool overlay field in the tool bar at the bottom of the crop workspace and change that from it's default of always to either never or auto. If you choose never, you'll never see that crop overlay. If you choose auto, the crop overlay goes away except when you press down to move the edges of your crop bounding box.

The grey area outside the bounding box is the part of the photo that will be cropped away. Sometimes that's enough to give you a good idea of what the cropped photo will look like. But sometimes I find all of the material around the crop bounding box distracting. Before I commit to a crop I like to evaluate it against a plain, dark background. To do that, I'm going to use the lights out function. I'll press "l" on the keyboard once to get to lights dimmed and another time to get to lights out view. In this view I still have the ability to drag the edges of the crop bounding box because I still have the crop tool selected, so I can get things just the way I want them.

I can click inside the bounding box and move the photo and I'm not distracted by all the rest of the interface. When I'm done, I'll press "l" on the keyboard again to turn the lights back on. Now I'm ready to commit the crop. To do that, I'll press enter on the keyboard. That closes the crop and straighten panel in the column on the right, and it displays this preview of the cropped photograph. Cropping is non-destructive like all develop module adjustments. That means you can always change your initial crop.

To do that, I'll go back over to the column on the right and select the crop tool again, or I could just press "r" on my keyboard. As you can see, the entire image is still intact. Nothing has been permanently cropped away. Again, I can tweak the crop bounding box by moving over any of its edges and dragging because I still have that lock unlocked over in the crop and straighten panel. By the way, if I wanted to start all over with a crop at this point, I could do that by going to this drop-down menu and choosing original.

But I'm going to leave things as is and I'll commit the changes I made to the crop, by pressing enter on the keyboard. One thing to remember about cropping in Lightroom is that is sets the aspect ratio or the relationship of height to width, but it doesn't set the actual size of the image. That's something you'll do later when you export or otherwise output a copy of the cropped photo. That's how to crop in Lightroom. The crop panel also has controls for straightening a photo and that's what we'll see in the next movie.

4/21/2015
Powerful, affordable, and available for Macs and Windows PCs alike, Lightroom Classic CC has become an extremely popular program for photographers of all experience levels. In this course, Jan Kabili provides an approachable introduction to organizing, editing, and sharing photos in Lightroom 6 and Lightroom Classic CC. She shows how to organize and find photos using collections, keywords, and the new People view, and introduces workflows to bring out the best in photos with the Develop module: adjusting exposure, correcting color, sharpening, making local adjustments, and more. Jan also shows how to create panoramas and HDR photos right within Lightroom, and share your project with the world.
Topics include: