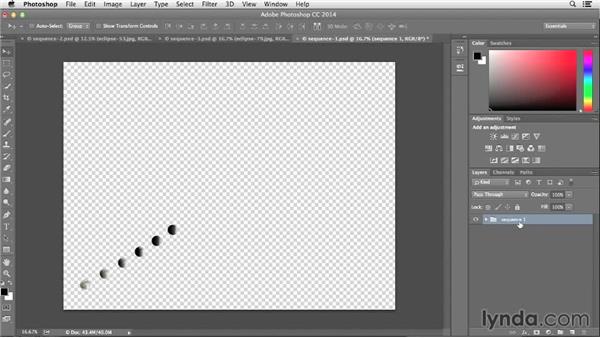 Once all the separate moonshots have been separated from their backgrounds. It's time to bring each of the sequence segments together to create a single sequence file. It can then be added into the background landscape image in the final composite. So here's my three sequence images. And I have the backgrounds deleted from each of the moon layers. There's just one thing I want to address here in case you run into the same thing yourself, and that is in my sequence three image. I had again the problem some of this big data extending out over the edge.

All right, so I'm going to go back to the sequence one image. because now you need to do is to decide which of these sequence segments to use as the base. Sequence image. And what we're going to do is we're going to add the other sequences onto this file. Now, you'll probably need to increase the canvas of the file in order to do this. We'll do that here in the next step. The first thing we're going to do is arrange these with a, an approximate distance between them. And we will fine tune this distance in a later step.

But right now, I just want to get these closer together knowing that we are going to be adding other moons into this sequence here. So that's good right there. I also want to group these into a layer group because it's going to be easier to work with them if they're in a layer group. So I have the bottom layer selected in this case. I'm going to shift click on the top layer. And I'm just going to come up to the pop-out menu for the Layers panel. And I'm just going to choose New Group from Layers.

And you can see, oh, here's something that happened that was unexpected. This bears an explanation here. When I dragged the sequence 3 layer group onto this file this sequence 2 layer group was opened. Because I had to make that little change there. So I need to move this out of there. I'm just going to make this active and drag it up until I see the little highlight line above the sequence 2 layer group. And that removes the layer group there so I don't have it nested. Good to explain that because you might run into that yourself. So I'm going to leave the moons separate here because as you can see there's still work to be done. And, we'll do that final work, later on in the exercise. So with all the moons assembled into a single sequence, this part of the composite is nearly done.

8/29/2014
A lunar eclipse is a relatively common astronomical event that always brings out the cameras and the long telephoto lenses. But the next time a lunar eclipse comes around, go beyond just taking a close-up of a darkened moon. Create a composite that shows the phases of the eclipse—and better still, shows the composite in the context of the landscape underneath it.

That's what photographer and educator Seán Duggan did, and in this course, he deconstructs his photographic steps and post-processing procedures.

The course begins with advice on how to plan and photograph the eclipse, with the right gear, the right focusing techniques, and the right exposure. Next, Seán evaluates the images in Lightroom, and then dives into Photoshop and shows how to composite each image into a finished photo. Along the way, he explores blend modes, layer masking, and other compositing techniques.