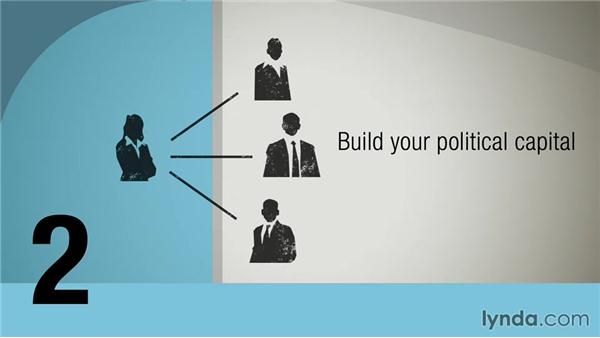 - Gore Vidal said, politics is made up of two words, poly, which is Greek for many, and ticks, which are blood sucking insects. That's not the word's real derivation. But for many of us, it captures the reality of politics and organizations. Just like in sports, some people play fair, some don't. Sometimes they get away with it for awhile, and sometimes not... Organizational politics is here to stay, and can either work for you, or against you. The real question is not whether to be political or non political, it's how to be politically aware.

And I'm not saying politics is always unhealthy, but there are three fundamentals you can use to navigate politics in a healthy, positive way, even if others sometimes don't. First fundamental, learn what's not on the org chart. Everyone knows about the formal org chart, with lines connecting boxes to show who reports to whom. That's a map about how things supposedly get done. But in addition to the org chart, you need to learn how things actually get done. Learn the culture, customs, systems, processes, and policies.

Learn, also, about the people, who make switch decisions, who influences the decision makers, and what matters to both of them. Here's an example of how someone did this to turn a frustrating situation to his advantage and an adversary into an ally. I worked with an IT executive we'll call Larry, newly promoted to vice president, for large global retail firm, transferred to a region away from US headquarters. Now another leader in that region had tremendous influence. He'd been in the role for several years, and even though he was officially at the same level as Larry, he snubbed Larry's initial attempts to meet with him.

According to the org chart, that shouldn't happen, but it did, Larry could insist he attend certain meetings with his counter-part, but he knew that forcing the issue would earn him a powerful adversary, and every subsequent interaction with the other leader would be a retribution reminder. To learn what wasn't on the org chart, he methodically met with diverse stakeholders. He found the best plan was to connect with the other leaders' direct reports. Soon, Larry was adding value to them, and they kept telling their boss who eventually invited Larry to all the meetings he wanted to attend, and more.

The second fundamental is build your political capital. Keep developing your own informal network. The people you know across your organization. Reach out to people, and add value to them, to earn their trust. Build those relationships before you need them. Gravitate toward solid citizens throughout the organization. People who prove themselves trustworthy, and are truly striving for the organization's greater good. Treat everyone with respect always. Don't get sucked into trading punches with politically devious types.

Stay poised and professional, don't get dragged into their tricky territory. It's bad for you, and they are probably setting you up. In disagreements, don't take things personally or make things personal with others. Never gloat when you win, or you'll earn an ongoing enemy. Make allies, avoid making adversaries. When things get heated, think ahead. It's not just you versus him or her, right here and now. You're in a complex web of people with different motives and agendas, and the web remembers...

Third fundamental, secure stakeholder support. Drive for results within your area of responsibility, using a four step method. First, clarify what success is, what are the specific outcomes you're trying to achieve. If things go as well as you want, what happens for whom, write this down in detail. Second, create a list of key stakeholders. Who are the people who will most influence whether you reach those successful outcomes, regardless of what the org chart says, who really has a say, or an essential role.

Who needs to contribute, take action give input, make decisions, or grant approvals. Third, what will it take to influence your key stakeholders. What will they need on their terms, in order to do what needs to be done. Find out not only what influences them, but who influences them. And fourth, based on your prioritized list of key people, and your supporting plans to earn positive, motivated responses from them, take action on those plans, and adjust as you learn more. Now, Gore Vidal warned us about those insects of organizational life, so use the three fundamentals to fend them off.

Use them also to keep expanding your political awareness, and follow the ever applicable advice from Pericles, leader from ancient Greece, where the word for politics was really derived, who said, "Just because you don't take "an interest in politics, doesn't mean "politics won't take an interest in you."