By far, the biggest challenge to an encore career is ageism, even in nonprofits and social change. There is still no #metoo breakthrough, but ageism is becoming part of the conversation. It's essential to sharpen your toolset by connecting across generations, always learning, and always being prepared.

- Now it's time to get to the elephant in the room, which is ageism, and ageism is real. Most people, there's all kinds of surveys that show people start experiencing ageism by the time they're in their 40s. In some sectors, like the tech sector, even younger, perhaps in your 30s. So, I would say there is four or five things that I would call the anti-ageism, you know, best practices list. So, the first one is to be aware that ageism sometimes comes from ourselves. So, any time you catch those thoughts that I can't learn this, I can't do this, I can't keep up anymore, I can't keep up with younger people, you have to kind of catch yourself and realize that you're actually holding an ageist belief against yourself.

So, there is a bit of self-talk that I think is really important to understand, and maybe some of the ways, there's that whole kind of fake it 'till you make it concept and I think that really applies here, which is one of the best ways to show that you are prepared is to be prepared. So, in every context, whether it's an informational interview, whether it's, you know, a new kind of task that you're taking on, think about what you need to learn and do your homework. I mean, the fact that we're doing this on LinkedIn Learning is a good sign that you're open to learning and that that's really comfortable for you.

The other kind of anti-ageism practice that I really think a lot about these days is networking up and down at every part of your life. Think about networking with both people older than you and younger than you, you know, connecting across the generations is one of the best ways to make sure that we know what's going on with older people and younger people, we stay relevant and also we prevent ourselves from having ageist beliefs 'cause ageism runs all ways. Many of us carry ageist beliefs about ourselves, about those older than ourselves, who Ashton calls our future selves, and those younger than ourselves who we often discount as not having enough experience.

So, help these ideas give you just a little sense of thinking about ageism, that there are some tools you have. I'm not going to promise that these tools will eradicate ageism, but until we have eradicated ageism, we can at least be prepared for it. 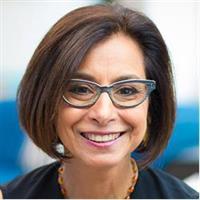