Creating keyframes for a sequence 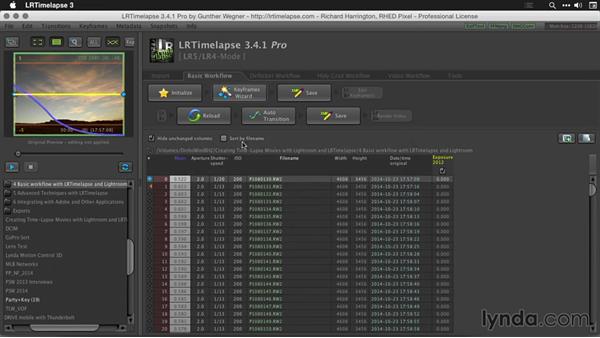 - The next step is key framing. Key framing is essentially an animation process. If you think about it, it dates back to traditional cell animation. The lead animators would draw the key frames, such as the pose of the character. Maybe they brought their hand up, and then raised it here. They draw those two major frames, and then the assistant animators would go in and draw all the in-between frames. This led to a process called key framing and tweening.

We will key frame using LRTimelapse. It's gonna evaluate the scene and look for major points at which the exposure, or other variables in the shot, have changed. Then, we can go back in and tweak those major frames, or key frames, and LRTimelapse will do all the work for us for every shot in-between. To start, just click the Key Frame Wizard button, and it will analyze the shots. For this particular lens, it doesn't see that there's an f-stop assigned, because it was a manual lens.

If you're using an older prime lens, or your lens didn't properly communicate, it might be unsure of the exposure value. If you want to add the aperture information, you can click "Yes". In this particular case, I was shooting at an aperture of about f/2.0. When I click "OK", that metadata value was added. You see the Aperture field has updated. The Key Frame Wizard has gone through and determined that there were only two key frames in this particular sequence.

The change in exposure was very linear and smooth. However, I can decide to manually add a key frame if I feel there's some key points. For example, right about here, I'd like to tweak that. I could click in the Key Frame column to manually add a key frame. You see it's added, and the blue dot appears. Drag through a little later and I'll add one more. If you feel like there's a need for more key frames, you could do that.

And I'd like one in there as well. You don't want to be excessive, but find a good balance between the auto key frames that are generated, and the ones you manually decide to add. I look for big changes in the scene that I want to tweak. This means that when I go into Lightroom, or even Adobe Photoshop or Bridge, I can modify the Camera Raw files. In doing so, the XMP file, or metadata, will update on how to develop the images. Now that I have my key frames marked, I need to click the "Save" button.

This will save all of the changes and update the metadata in the files. Make sure the blue progress bar completes before you switch and leave the application. Now, it's time to edit those key frames, or key images, over in Adobe Photoshop Lightroom, or Bridge with Camera Raw.

3/3/2015
Transform your still image sequences into stunning time-lapses with Lightroom and the incredible but easy-to-use companion app, LRTimelapse. Rich Harrington starts this course off explaining how an all-raw workflow can help you make the most of this toolset and get you the best-looking results. Then he shows how to process raw images in Lightroom and use LRTimelapse to address more complex issues, such as flicker and exposure changes over time. Then he demos two options for final assembly of your time-lapse movie: exporting directly to video from LRTimelapse, or bringing the still images into other Adobe and Apple programs to build your time-lapses there.
Topics include:

Video: Creating keyframes for a sequence