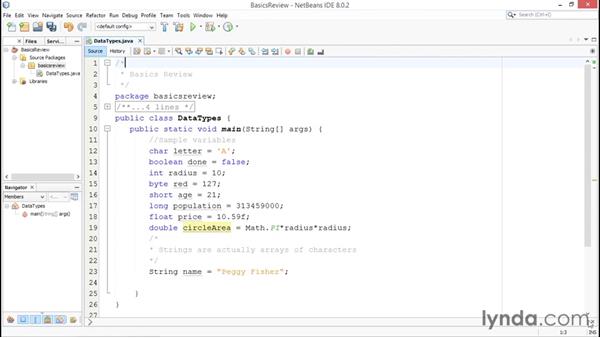 - At this point, you should already have downloaded an Integrated Development Environment., or IDE, and be familiar with using this IDE. For this series, I'm using NetBeans. But if you prefer to use Eclipse or BlueJ, which are also free interactive java development environments, that's fine, and most of the examples are easily adapted to those environments. If you need help downloading an Integrated Development Environment, please see "Up and Running with Java," on lynda.com. As you know, Java is a strict data-typing language.

That is, every variable must be declared with the data type, and your program cannot change the type of data stored in that variable. For example, if you declare a variable to store numbers, you cannot try to store Strings in the same variable. You would get an error message, "Incompatible types: String cannot be converted to int." Each programming language has the same basic parts. Let's do a quick review. Comments. Comments can be single-line or multi-line.

Variables include the data type and the name. Expressions, which are equations or statements. Decisions, such as "if something is true." Loops, which allow the program to repeat. Input and Output, which can be from the console or files. And Methods. Some languages refer to Methods as functions. And there are more parts, but those are the ones you want to concentrate on for now. Let's take a minute to quickly review expressions with data types.

In this case, I have red set to "127." A byte can be from -127, to +127, or unsigned values from 0 to 255. On line 16 we have a data type called "short." It's also an integer, but it's much smaller than an int. Short age equals 21. Sometimes you need to hold a very large integer. Then you want to use "long." And finally rational numbers, such as "float" and "double." Notice that when you declare a variable of type "float," you need to include the "f" after the number, "10.59f," and finally we have a String variable named = "Peggy Fisher." Strings are not technically a primitive data type, but since they are used so often, it is usually included when discussing primitive data types.

In this case, my variable "fruit" has the address "@31eb494e." That's the hashcode for where the data is located in memory. Later we'll talk more about objects and classes, and it's helpful to know that every primitive data type has a corresponding wrapper class. This allows us to create objects that contain values, such as integers, characters, etc. For example, "int" has a corresponding wrapper class called "Integer," "double" has a corresponding class called "Double." Notice the capital "I" in "Integer" and the capital "D" in "Double," as well as the "B" in "Boolean" and the "C" in "Character," because classes always start with a capital letter.

This was hopefully a review for you. If not, you might want to go back and review "Up and Running with Java." 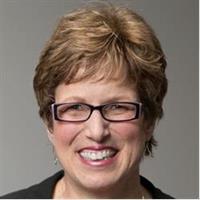 6/29/2015
Taking a college-level programming course? Maximize your learning with these Java tutorials. Peggy Fisher explores command-level programming, basic techniques such as managing loops and creating methods, debugging Java code, working with classes and objects, and storing and sorting arrays. Along the way, she investigates the Java API and Java's capabilities for running simulations and algorithm analysis, and issues challenges to write programs that utilize all of these Java features.
Topics include:

Q: How can I make my debugger function like the author’s?

A: When you are debugging your program in NetBeans, if you do not see the new contextual items on the menu bar for stepping into your code, check to see if the source file is accidentally deselected.
Highlight the program you want to debug in your projects folder. In the menu bar, choose Windows > Debugging > Sources. A new window will appear with the file path name. If the checkbox is not selected, click the box to select this file.
Now you can go back to your program and rerun the debug operation on your code.