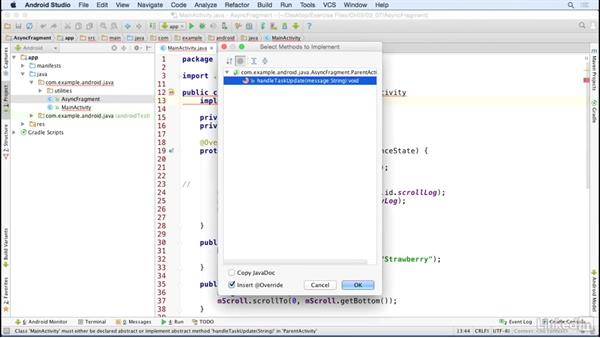 The abstract class AsyncTask is one of the most popular concurrency tools in Android. It lets you run code in a background thread while still communicating with the user interface. But AsyncTask has a well-known issue: if you declare an AsyncTask object as a member of an Activity, the task can be destroyed along with its parent activity during a configuration change, such as a change in orientation. To prevent this, you can host the asynctask in a fragment object that doesn’t have a user interface. That object can be retained in memory, even during app configuration changes.

- [Voiceover] Mobile applications depend on multithreading…to give the user a sense of good performance.…If you do all of your work on the user interface thread,…the application can freeze up during long-running tasks.…The abstract class "AsyncTask" is one of the most popular…concurrency tools in Android.…It lets you run code in a background thread…while communicating with the user interface.…But AsyncTask has a well known issue.…If you declare an AsyncTask object as a member of…an activity, the task can be destroyed along with its…paired activity during a configuration change,…such as a change in orientation.…