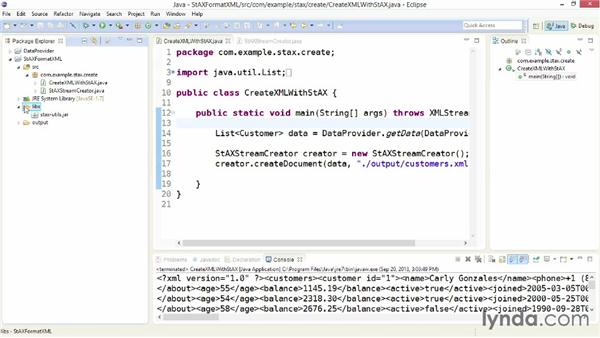 In the previous movie, I described how to fill the XML document with data, using StAX. And I showed you the beginning of the solution but not the end. In this project, StAXFormatXML. I have the completed code, in the class StAX stream creator. In addition to the ID, attribute and the customer NAME, I am now writing out the PHONE, ABOUT, AGE, BALANCE, ACTIVE, and JOINED values. All taking into account the various properties data types in my customer POJO class.

Right now, I'm writing out XML without formatting. So it's all compacted together. And just as with DOM or JDOM, if you're trying to create XML to send over the web, you might want to keep the XML compacted like this. But in many cases, you'll want to format it, adding indentation, creating an XML style known sometimes as pretty printing. There's a class available named indenting XML Stream Writer, and it's found in some StAX implementations, but not all.

And specifically it's not included in the Oracle JDK, version 7. So if you want to format your XML using the simplest possible approach, you'll need to go get a new JAR file. You can find this JAR file from this website at java.net/projects/staxstatsutils/downloads. To download the most recent stable version, as of the time of this recording, that was staxutils20070216.

So you can see that this is a very stable library, that has not been undergoing recent updates. I have already downloaded the ZIP file to my desktop and extracted it. And I'll find this JAR file, stax-utils and I'll copy that JAR file to the clipboard, then I'll go back to Eclipse to the package explorer and I'll paste that JAR file into the Lives folder. Then, I'll add it to the project's build path, by right-clicking on it and choosing Build Path &gt; Add to Build Path.

If you're working in some other IDE other than Eclipse, follow that IDE's process for adding the JAR file to your build path. Next, I'll go to the class StAX Stream Creator. And this is where I'm writing out my XML. Currently, I'm writing it out to a string. Using the XML stream writer, and Java's string writer class. Now, because I have that JAR file in my build path, I can create an instance of the class IndentingXMLStreamWriter, which is a member of the package Javanet.staxsutils.

The XML is output, and it's pretty printed with indentation. Now again the IndentingXMLStreamWriter class is included in some StAX distributions. Just not in the default distribution that's included with the Oracle JDK. But it's incredibly simple to use, and if you need formatted XML, it's the easiest way to get the job done.