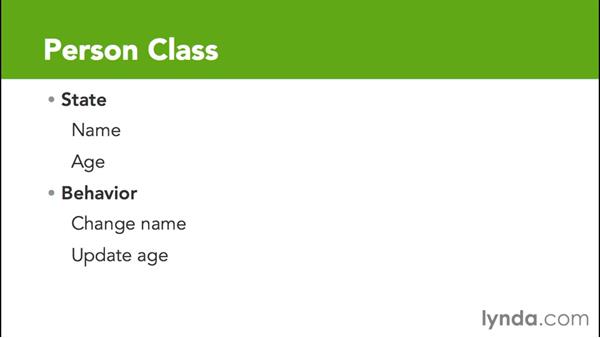 - As you know, Java is considered an Object-Oriented programming language, but what does that really mean? Classes and Objects are the main focus of this section. A Class is a blueprint for an object. Classes are used to represent the State and Behavior of that object. For example, if we have a Person Class, the person would have a State, which might be their Name or their Age or both, and they'll have a Behavior, such as maybe we need to change the name.

They got married or it was spelled incorrectly when the person was first added, or maybe we need to update their age. So a person has some state values, some attributes, Name, Age, and Behaviors, that we will use to update the data for this person. Change their name or update their age. We use Classes to model Real-world objects, such as Bank accounts, Vehicles, Animals, Inventory, and Movies, just to name a few.

Each class contains Instance data, Constructors, which are special methods used to build an instance of our class, and Methods, the blocks of code common to all objects of this class that represent the object's behavior.

6/29/2015
Taking a college-level programming course? Maximize your learning with these Java tutorials. Peggy Fisher explores command-level programming, basic techniques such as managing loops and creating methods, debugging Java code, working with classes and objects, and storing and sorting arrays. Along the way, she investigates the Java API and Java's capabilities for running simulations and algorithm analysis, and issues challenges to write programs that utilize all of these Java features.
Topics include:

Q: How can I make my debugger function like the author’s?

A: When you are debugging your program in NetBeans, if you do not see the new contextual items on the menu bar for stepping into your code, check to see if the source file is accidentally deselected.
Highlight the program you want to debug in your projects folder. In the menu bar, choose Windows > Debugging > Sources. A new window will appear with the file path name. If the checkbox is not selected, click the box to select this file.
Now you can go back to your program and rerun the debug operation on your code.