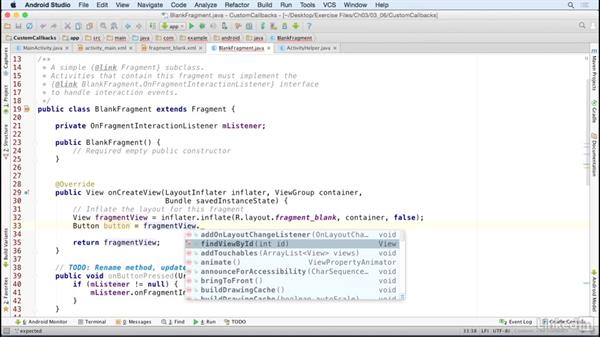 Java callback methods are used to implement event handlers and other common Android programming elements. These sorts of callbacks can be used in Android apps whenever you want Java objects to communicate with each other. For example, you might have an activity whose layout contains a fragment. When something happens within the fragment, you might need to communicate that to the containing activity. In some programming environments this might be done with an event dispatching system. The fragment might dispatch an event, and the container would listen for and respond to the event. In Android though, you typically implement this with a code in the fragment class calls a method in the containing object - a callback.

- [Voiceover] Java callback methods are used to implement…event handlers and other common Android design patterns.…But you can also use callback methods to let Java objects…communicate with each other at runtime.…For example, you might have an activity…whose layout contains a fragment.…When something happens within the fragment,…you might want to communicate that…to the containing activity.…In some programming environments,…this might be done with an event dispatching system.…The fragment might dispatch an event and…the container would listen for and respond to that event.…

In Android though, you typically implement…this with callback methods.…The fragment class calls a method in the containing class.…Here are the steps.…I'm working in the project "Custom Callbacks."…I'll add a new fragment to the project.…I'll right-click on the project in the project window and…I'll choose New, Fragment, and…I'll select the first option, a blank fragment.…In this dialogue, I'll uncheck the option…to include fragment factory methods.…