Setting security controls for an issue 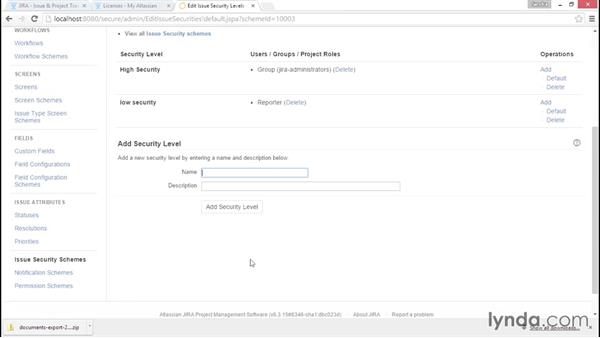 Now that we've set up a new issue security scheme, and added two different security levels, let's go back and associate this scheme with our project. First, let's open up a project. I'll select Project from the header menu, and choose the Software Development project. Now, in the Administration panel on the left, I need to select Issue Security. Here you can see that the current issue security scheme is set to 12345. Let's go ahead and change that to the security scheme that we just created.

Click on the Actions button, and select Use different scheme. Now, from the dropdown, you should be able to select Security for HQ Issues. The security scheme we just created. If there aren't any previously secured issues, or if the project didn't previously have an issue security scheme, you can skip this next step. If there are previously secured issues, which we can tell there are because it shows the security level of executive level and three affected issues, we'll need to select a new security level to replace the old level.

In the next video, we'll work on cloning, linking, and moving an issue.

3/24/2015
JIRA is a popular project- and issue-tracking tool used by development and technical support teams to get more work done, faster. In this course, Sandy Toner introduces the key tasks involved in installing and administering JIRA, including setting up new projects, tracking tasks through the JIRA workflow, and managing users and groups. Plus, learn how to customize workflows with fields and screens, control permissions and JIRA security, and use add-ons to help JIRA better support agile development cycles.
Topics include: