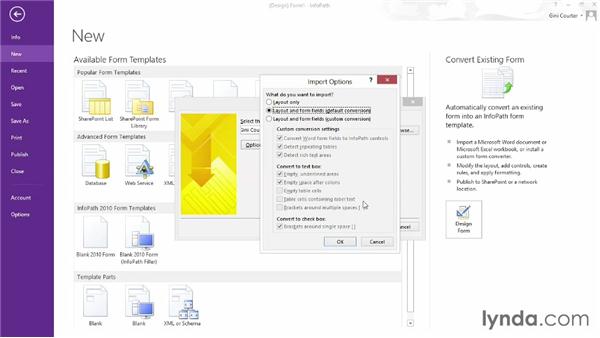 InfoPath includes two different conversion utilities to take existing forms in Word or in Excel and convert them to InfoPath forms. Now I would be negligent if I didn't tell you about this early on because most of our organizations that we work with have lots and lots of existing forms. You might wonder why don't I just convert those. So I want to show you what that looks like, but it's little more difficult than it actually looks, so we'll talk more about this at the end of the course. Here is my form in Microsoft Word. So it allows users to enter information.

This form was originally created in Office 2010 so it uses the nice little XML here. You can see that it has fields and controls to capture information and that they are actually labeled. It has checkboxes on it, has some other information. The entire form isn't here, but this will be enough to give us a flavor. If you want to play along with me, you can go ahead and open this form because it's in your exercise set. So I'm going to close the form in Word. Here we are in InfoPath.

So in InfoPath when I choose new, one of my choices is Convert Existing Form so I'm just going to double-click. The import wizard only wants to know one thing. Is this an Excel Workbook form or is this a Word form? This is a Word form and there's a possibility if to out to the Office Marketplace and search for other converters that have been built as third-party products, but these are the two that are built in here. So InfoPath importer for Word documents, click Next. Select the file to import. There's my file. And then I'm going to click the Options button so that you can take a look and see what some of the options are here.

The default is to retain the layout that that form has and also the form fields. Notice that these choices here are not enabled and the reason is if I want to make some other choices here, I need to say yep, I also want to specify some custom conditions to configure this import. So the default is to convert any Word form field to InfoPath control. If there's a text box in Word, make it a text box there in InfoPath. To find repeating tables, those places where I put 20 rows so that people could enter all of their expenses or all of their requests.

To detect rich text areas as different from areas where we had somebody just enter text in a plain text box in Word. And then if there's an empty underlying, turn it into a text box. If there's a colon and a space afterwards, assume that that's a place a user is going to put information, turn that into a text box. And then some choices that are turned off, but you might imagine that the way somebody created a form in Word was they just left an empty table cell as a place to put information. So if you want to turn that on, you would make this choice and you'd click the checkbox.

That if we had a table cell that had label text in it, we might want that to become a text box and if someone simply put a set of brackets with space in between them that that would be a place to type information as well. Okay, so any of those that are found, you could convert to text boxes. Some people when they design forms, they use an open and close bracket set as a place that you would type an x and if those are detected those would be turned into checkboxes. So these are the default options right here.

If you like them click OK and then simply click Finish. Okay so, InfoPath says this form was imported successfully, but one or more potential issues were identified and we could find them in the Design Checker. So I'm going to click OK. The Design Checker comes on and it says, there might be somethings that were positioned incorrectly. We'll find out what that means. How incorrectly? Well, actually the incorrectly is there is some stuff centered here and the rest of our form is way over to left.

That's actually not so bad. It could be much much worse. We can arrange that. But these are just labels, we can delete these and we can type them in again in a way that we would like to see them. Here the things that I'm interested in. The thing I'm concerned about here is how did my data show up, because you'll notice that it brought the form in and there's really not a field here. There is just text. So if I go and click on data and I say show fields, you'll notice not a single data field came in here for Microsoft Word.

Again, that's not unusual. There are some strategies that we can use to make InfoPath do a little better than it did in this particular case. But it might be that all we really want is the table, the structure, because this gives us a great head start. This is really well laid out. So, if I decided that I mostly wanted the layout and then I would go in here and say okay, I'm going to delete that text. I'm just going to throw in a text box. Look at how well that works, because the spacing is already here. So let's take another swing at this.

I'm actually going to close this version right here and not save it. And just say, I want to convert an existing Word document, our same document, and in this case, I just want the Layout. And I still have the same issue up at the top that I need to do something with that. But all I have is the layout and I don't really expect to get the form fields. It will focus really well on getting this layout down as cleanly and as crisply as it can.

So two different possibilities; Word and Excel, several options on how we would convert it. And again, we'll return to this topic later in the course. But if you really just want to grab the design out of a form and have your layout tables and go forward, this isn't a bad way to do it and it will give you a head start on creating your form in InfoPath.

4/5/2013
In this course, author and InfoPath expert Gini Courter shows how to create and publish sophisticated electronic forms using the latest version of the Microsoft form-creation tool InfoPath. The course features the InfoPath Designer tool and provides in-depth tutorials on designing form templates, and explains how to create and publish forms via email, the web, a network share, or SharePoint. Gini also demonstrates advanced aspects of InfoPath, like connecting forms to outside data sources and building templates from Office documents, databases, or XML files.
Topics include: