An overview of working with images 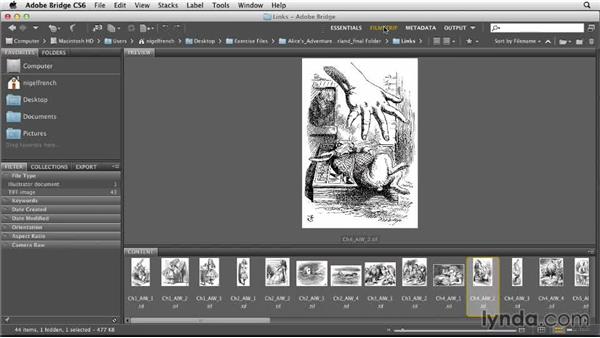 Join Nigel French for an in-depth discussion in this video An overview of working with images, part of Designing a Book (2013).

So you can refer to this for the placement of the images. I have also labeled these images. The first part of the file name indicates the chapter that they go with. And then, they are numbered sequentially within that chapter. Here I am in Bridge where we can, just get a sense of the kind of imagery that we are working with. And you might wish to switch to filmstrip in Bridge.

And then you can use your left arrow, right arrow to move through these images. These are the original illustrations drawn by John Tenniel. And if you want some information about John Tenniel, or Sir John Tenniel, as he later became. You can find that on Wikipedia. Some of these images will have the text wrapped around them, as is the case with the white rabbit here on the opening page, and some.

Will be in-line objects, so it's going to be a mixture of the two that we're going to be creating object styles for those different types. Keeping in mind that we are going to be making an ePub version of Alice in Wonderland, the in-line graphics are going to work far better, there going to translate far more easily. To the ePub format than those that have text wraps around them. But we're not going to let that inhibit us, I mean, we're basically we're going to do whatever the image requires, whatever looks best. But bear in mind that, when we do come to, later on, translate this version to the ePub version.

We are going to have to change things around a bit for those images that we apply text ramps to. So that's a general orientation to the images, meet me in the next movie and we'll actually go about placing them.

Video: An overview of working with images