An overview of the image workflow 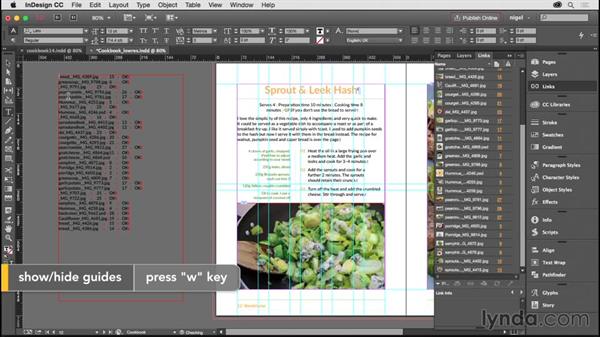 Join Nigel French for an in-depth discussion in this video An overview of the image workflow, part of Designing an Illustrated Book.

- This movie is about my image workflow. I took a lot of images that are in the Camera Raw format. I'm only going to use a very small portion of these, but the Camera Raw format is very flexible, that's why I'm using it, but the file sizes are large and we can't place a Camera Raw file into an InDesign document. Rather than edit all of these before I know which ones I want, what I'm going to do is, do a batch process to export all of these at low resolution, work with the low resolution files, figure out which of them I'm going to use, and then from the InDesign document in progress export a list of only those files that I used.

Then go back to my original raw images and edit only those. I admit here to some backwards engineering to show you this process. But this is essentially how it works. I'm going to select all of these. And then in Bridge, come to the Tools menu, Photoshop, Image Processor. And I'm going to make a low resolution .jpg. Low quality, low resolution, and resizing it.

I'm just resizing them to 600 pixels. And I'm saving these all in a folder called "low res." Having done that, those are the files that I work with in InDesign. When I say that I'm backwards engineering, what I mean is that, originally when I was working on this, they looked worse than this, because they hadn't had their exposure adjusted. These have. But they are at too low resolution to print. And we can see that because down here we have a Preflight Warning.

Click on the first one, scroll down, hold down the shift key, and click on the last one. Links panel menu, Copy Info for Selected Links. I now need to alphabetize that list. I'm going to just click and drag and then paste that onto the Pasteboard. Let's turn on my guides so that I can see my Pasteboard. I can actually delete that first row, don't need that. Select all of them. I'll come to my Scripts, and I'm going to use a sample script called Sort Paragraphs.

Double-click on that. That's going to alphabetize my list. I'm then going to copy that, command C, and go to a text editor, and paste it. I'll print that list out. I now return to my original raw images. How many of those images do I actually end up using? We look on the Links panel. I'm using 31, originally, 195. So, comparing that list to what I see here, anything that's on the list, I'm just going to give it a star rating.

And to do that, select it, command 1, command 1, or whatever number of stars you want to give it, just so long as you're making it in some way different from the rest. We can then come to the Filter panel, and we can filter just those. So, those are the ones that need editing. Once they've been edited, all 31 of them, I would then do as I did before. Select them all, come back to the tools menu, to my Image Processor.

And once again, I'm going to make .jpg copies from the raw files. The quality will be the maximum, 12. And there will be no resizing. Having done that, and I've already done that, what I now need to do, is relink to that folder. So I saved them all to a folder, which is called "hi res," and I'm now going to relink all of the low res images in this document to that folder.

Once again, select them all. And choose "Relink to Folder." This is the folder they're currently coming from. This is the folder we want to get them from. They're all the same file extension, so I don't need to change that, although I could. And after a brief pause, all of those high resolution images replace the low resolution images. Remember, before I had 30 errors, now I have two errors. Let's just go and see what those are about.

Transparency not allowed, I'm not concerned about that. And the back cover image, well, that's at a resolution of 334 as opposed to, it needs to be at least 350, but it was me that made that rule. And I'm going to break the rule in this case, because 334 is actually fine. That was my process. Having outlined that, I'm now going to show you the kind of edits that I was making to these images in Camera Raw.

8/12/2015
Learn how to design an illustrated book, like a cookbook, children's book, or art book, with InDesign, Illustrator, and Photoshop. Nigel French helps you assemble text, photos, and infographics into a stunning layout with front and back covers. Along the way, he dives into the nuts and bolts of working with paragraph, character, and object styles, and captions, grids, headers, and master pages—all the elements that make designing an illustrated book such a challenge. At the end of the course, he'll help you prepare two versions of the book: one for print, and one for digital publication.
Topics include:

Video: An overview of the image workflow