The curious history of the interactive PDF 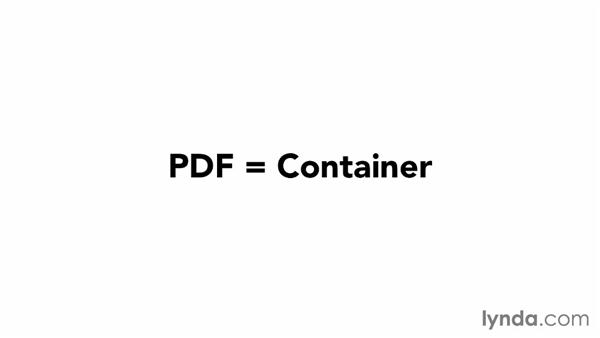 Join David Blatner for an in-depth discussion in this video The curious history of the interactive PDF, part of InDesign: Interactive PDFs (2013).

In the early 1990's, John (UNKNOWN) (UNKNOWN) and some brilliant folks at Adobe came up with the idea of a portable document. A file that you could transfer from computer to computer. And it would always look and act the same. It's hard to remember now, how revolutionary this idea was, but I remember plenty of folks who thought it just couldn't be done. The technical hurdles were huge, though the benefits were clear. Especially back then, when it was a real pain to send people your documents. Some people called this idea e-paper, but Adobe called their software reader, a bright, and colorful name.

Carousel, and they code named their technology Camelot, a reference to a glorious place filled with optimism. Ultimately, the name came down to earth a bit and became know as the Portable Document Format or PDF and the software became known as Acrobat. There's no doubt that it took a while to catch on too. Adobe lost money for several years in a row, as they tried to get people to use it. But over the past two decades, PDF went from crazy idea to a world wide standard. And today is the source of most of Adobe's revenue.

But to me, one of the coolest things about PDF is that from the beginning it was designed to be a container for almost anything. Adobe knew that the world was made of more than just text and photographs laid out in printed newsletters and books. Because of Adobe's forethought, PDF files can contain movies, music, buttons, notes, animations you can even embed other files or run programs from within it so that a PDF can react to you. Hundreds of millions of people now use PDF to fill out forms, read magazines and documentation.

Unfortunately, that original dream of a true universal document that everyone sees, and interacts with the same has broken down a little bit in recent years, because not everyone uses Adobe's own Acrobat Reader anymore. While PDF is a standard, not all PDF readers, that is, the software that you use to interact with the PDF, not all of them work the same, or show the same things. In fact, even Adobe's Reader app doesn't work the same way on all devices. What you see on a desktop or a laptop might be slightly different than what you experience on a tablet or phone. Now I'm still a big believer in PDF, but as I'll explain in a later chapter, its not a perfect solution.

Ultimately, the more you know about how to make an interactive PDF, the better off you're going to be in insuring success.

7/23/2013
While PDFs can be used for printing, they also have interactive features that make them great for forms, brochures, and prototypes. In this course, InDesign insider David Blatner tells you what interactive PDFs are, why they're so useful, and how to make them yourself with Adobe InDesign and Acrobat. Learn to make hyperlinks to websites, other pages in your document, and email; add buttons that navigate, show, and hide content; create a form with check boxes and text entry fields; and embed audio and video. Plus, discover how to add polish with calculations, page transitions, and more.
Topics include:

Q: I am trying to turn objects in a layered InDesign document into buttons, following the lessons in Chapter 3, but they don't show up when I export to PDF. What's wrong?

A: This is a known issue with InDesign, stacked layers, and buttons. The final stacking order in your PDF is actually determined by the order the buttons are created, not the stacking order of the layers in your document. David Blatner has researched and proposed a solution to this issue on his InDesign Secrets blog. Read more about it here.

A: The author updated three movies in the "Links and Bookmarks" chapter, since the behavior of hyperlinks has recently changed in InDesign CC.

Video: The curious history of the interactive PDF