What is and is not included in an InDesign EPUB export 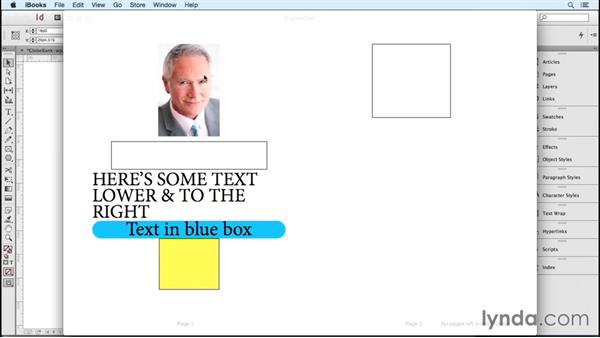 - Features that you take for granted in InDesign files are often not possible to replicate in an EPUB. It doesn't necessarily mean that an EPUB is hobbled, it's just that it's a horse of a different color. Knowing ahead of time what gets converted and what won't will help you mildly. Now you might remember this Globe Bank white paper that I talked about in the video about comparing reflowable versus fixed layout EPUB, and when we exported this to reflowable, some of the results weren't ideal.

The text came through, but many other elements did not come through. I've saved that, let's jump over to iBooks and take a look. Once the book opens, you can see that the elements that were arranged in no particular position in InDesign came through one right after the other and there are no overlaps. Text came through, but not quite in the format that we want, but mainly I think the problem here is with positioning. There were a lot of elements that were precisely positioned or overlapping, like captions along with photos that just didn't make it through.

As I continue scrolling forward, you can see that many of the elements do appear and some things are nice. Look at this, we have the drop cap, the table's working nicely, but other things are not working nice. Let's jump back to InDesign, where I've created a document called ExportTest that puts InDesign through its paces when it exports to EPUB. Some things that don't get converted well or at all are things like type on a path, positions of text frames, nonrectangular InDesign objects like this triangle or star, and even bleeds.

You don't see things cut off. If an element is overlapping the page, the entire thing goes through. So let's go ahead and export this to EPUB, I'm gonna press cmd + e for the keyboard shortcut, and we'll put it right on the desktop, I had another here earlier, I'll replace it. Export to EPUB 3.0, we don't need a cover, and see what happens. Well, first of all, we get a warning that says, some things are not gonna go through correctly. It would be even better if they had some kind of preflight that would let us know about these things ahead of time so we could modify them, but we don't, not yet, great feature request, though.

I'll click OK, and it's opening up in both ADE and iBooks. So you could see that that picture came through not cut off on the lower left, but right at the top. And the text on the path was removed, we just see the box surrounding the text and the path. The same thing happened with these two text frames, remember they were in two different positions, on the left and lower right, and here they're one right after the other. The background of the box and around the corners came through, but not its position either.

And then the elements that were nonrectangular were converted to rectangles. Now you might be wondering why are they appearing in this order rather than in this order, and that's because of how InDesign processes the elements on a page, from left to right and top to bottom. And watch the video later in this chapter about layout order and you'll understand that better and know how to manipulate it. But I've whipped up a list of elements and attributes that don't quite make it through the EPUB export process so that you'll have a heads-up. So let's go through these briefly.

Anything on a master page does not get included in the EPUB export, which is good. So you should be putting your page folios on the master page and you don't want those to appear in EPUB 'cause they would not make any sense, right? Page numbers? If you have overridden a master page object on a document page, though, that will get included. Items on a pasteboard, fully on a pasteboard, get left behind. So do items that you've hidden, by turning off the eyeball in Layers panel, or set them to be non-printing. And that's kind of a good thing, it gives you a little bit of control.

If you don't want something to be in the EPUB, you can hide it or set it to non-printing. Anything that's overlapping each other gets converted to sequentially exported objects like all those triangles and diamonds that we saw. If you have white space between frames, that gets collapsed, and inside a frame, multiple columns inside a single text frame or formatting for paragraphs that do span and splits. Those all get converted to a single column of text. Object geometry is the technical term for where items are positioned on the page.

So that gets ignored, everything gets output in one single text flow. If you have Text Wrap set on some elements, that also gets ignored, and that's counted as an overlap in objects, so they'll appear sequentially. There is a way to do Text Wrap in InDesign for EPUB, but there is a different dialog box for it, and I cover that in the chapter about optimizing text. If you have paragraphs set with the rule above or below, the rules get left behind. The text makes it through, but you'll never see the rule above or below. Tabs, space runs, and return runs don't make it through, they're all collapsed to a single space.

For example, if you're using a tab to indent the first line of a paragraph, you'll see that in the EPUB there's only one space. You need to use left indent, first line indent, space above and space below to maintain the spacing. Nonrectangular InDesign art gets converted to rectangles or you need to rasterize that and I'll be talking about that in the chapter about working with images and objects. And as we saw, type on a path does not make it through at all. Finally, there are some OpenType attributes that you might be applying to your text that aren't supported yet in most EPUB readers and they'll just get converted back to plain attributes, and I'll be talking more about that as well.

So now that you know this information, it'll be a lot easier for you to go through an InDesign document and judge what needs to be done in order to get the best possible EPUB out of that.

Video: What is and is not included in an InDesign EPUB export