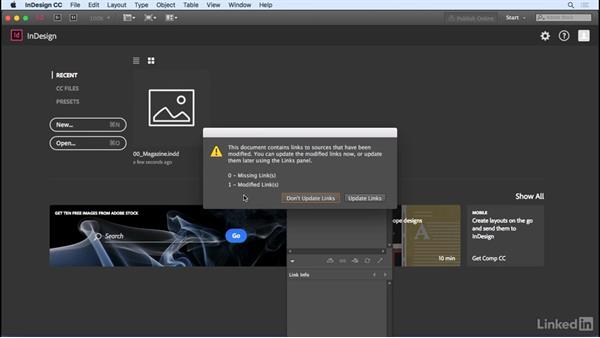 - [Instructor] Before we jump in and start learning about InDesign's features and how to use them, let me say a quick word about the exercise files available for you to use. If you're a Premium member of the online training library, you have access to the exercise files that I'm going to be using throughout this training. Now these files have been broken down into chapters, and if you're following along, it's important to open the correct file for each chapter. Many of these files have the same or similar name, but they are in fact significantly different in order to show off or discuss particular features in the program.

To open a document, you simply double-click on it. Actually, I should point out that if you're using an older version of InDesign than I am, you might have trouble opening my files. In that case, open the IDML file instead. But, in this case, I'm going to double-click on the INDD file. Now if you see a dialog box like this that says there are modified links, go ahead and click Update Links. But, if the message says that the links are missing, then you can click Don't Update Links, because those files probably aren't necessary for this particular exercise.

You'll likely also see a dialog box that says you're missing fonts. Now if you want, you could use the Find Font feature down here in the lower left corner to replace these with fonts that you have on your system. However, because you're an Adobe CC subscriber, and you have the Creative Cloud app running, you can sync all of these fonts with Typekit. All you do is click the Sync Fonts button, and in just a few seconds Creative Cloud downloads the fonts and installs them on your computer. Now one more thing about these files: after the end of each movie, after I've moved things around or changed them, you should go up to the File menu and choose Revert.

That way, you'll see a nice clean file at the beginning of each movie. Now the reason I do this is so that you can jump right to any movie you want, even if it's in the middle of a chapter, and you won't be lost. Now there is one exception to this, and that's in chapter one, where each movie actually does build on where we left off in the previous movie. On the other hand, if you're not a Premium member to the online training library, you won't have access to these files, but you can still learn by either just watching what I do, or by following along using your own text and image files.