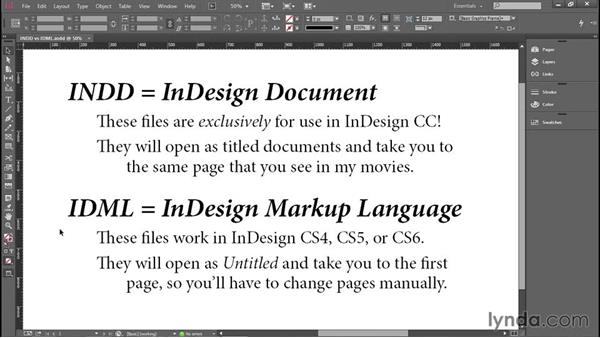 Depending on your level of membership to Lynda.com, you may have access to my exercise files, which allow you to work along with me, in which case, I'll explain how to use those files in this movie. If you do not have access to the exercise files, you can still follow along with this course. You'll just have to create your own files, in which case, you can skip to the next movie. For those of you who can get to my exercise files, I'm assuming that you've downloaded them as a zip file to your computer's documents folder or desktop.

If not, please take a moment to do so. Then, you'll want to unzip the file. On a Mac, you can just double click on the zip file to unzip it. On a Windows, you'll need to right click on the zip file, and choose extract all, and then click the extract button. The unzipping process will take a moment or two to finish, but we're going to speed things up here in the video. After the unzipping finishes, you should see a subfolder called exercise files. Go ahead and drag it out to the desktop, like so, and then you can close this old folder.

It's right up here, as you can see, and you can select both the old folder and the zip file, and drag them either to the Macintosh trash, or the Windows recycle bin, in order to throw them away. Next, open the exercise files folder, and you'll find a subfolder for each of the chapters in this course. Go ahead and double click on the 01 document subfolder, and you'll find two versions of every file. Now, you may be able to see four character extensions after the file names.

If you can't, here under Windows 8.1, you can go up to the view menu, and then turn on the file name extensions checkbox. It's not really essential that you see these extensions, however, because you can identify the kind of file from its icon, and notice that we have these purple INDD files, as well as these white IDML files, and let me show you what's going on with those. INDD stands for InDesign document. These files are exclusively for use in InDesign CC, which is a version of the software that I'm using, and you need to make sure you have the 2014 version of InDesign CC, or later.

These files will open as titled documents, so you'll see the title up here in the title tab. For example, this document is called INDD vs. IMDL, and they'll take you to the same page that you're seeing in my movies. If you're using a version of InDesign other than CC, then you'll need to work with the IDML documents, which are those files that have white icons. IDML stands for InDesign Markup Language. These files work in InDesign CS4, CS5, or CS6.

They will open as untitled, and you'll be taken to the first page in the document, so you'll have to change pages manually, and let me show you what that looks like. I'll go ahead and switch back to this 01 document folder, and I'll double click on this file called Photoshop 3D notes.INDD, which is the purple one. Again, you'll need InDesign CC to open it. Now, it's very possible that while opening the file, InDesign will display an alert message telling you that this document contains links to sources that have been modified.

This happens because the exercise files have newer dates on your machine than they did when I first created them, but this is never a problem. Just click on the update links button to make sure all the images look their best on screen, and then close the links panel by clicking on this tiny double right triangle icon in the top right corner of the panel, in which case, I'll see a title of the document up here, at the top of the screen, and I'll be taken to the page that I was last working on, which in this case is page three, over here on the right hand side.

Now, the thing is, if you're working with an older version of the software, by which I mean CS4, CS5, or CS6, you can't open this file, so instead, you'll want to open that white IDML file, and notice in that case, you're going to open the document untitled as we're seeing right here, so it's as if it hasn't been saved. If you see any weird interface elements, such as these little red half boxes, then drop down to the bottom of the toolbox and switch from normal to preview, and everything will disappear, and then you can go ahead and switch back from preview to normal once again, at the bottom of the toolbox, and everything should look better.

Notice that we're also seeing page one of the document. If I want to advance to page three, as in the movie, then I would go down to this page number in the lower left corner of the window. Click the down pointing arrow head, and choose page three from the list, and now I can see page three like so. You'll also have to save your changes, if you make any, by going up to the file menu, and choosing the save command, and InDesign will treat it as if this document has never been saved before. Now, we're going to review everything I've told you so far in subsequent movies, but I just want you to understand what's going on, and that's how you take advantage of the exercise files that I'm providing to you for my course, Introducing InDesign.