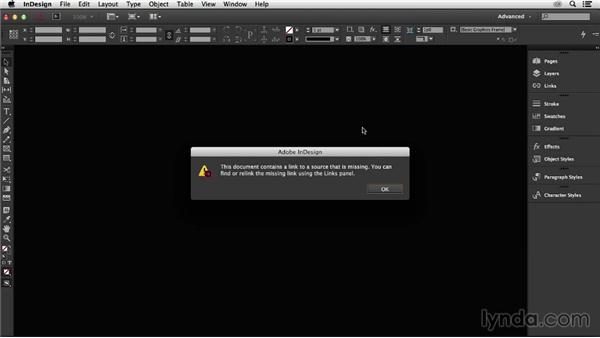 Join David Blatner for an in-depth discussion in this video Using the exercise files, part of InDesign: Data Merge and Database Publishing.

Before I start showing you Indesign's database publishing features, let me say a quick word about the exercise files available for you to use. If you are a premium member of the online training library you have access to the exercise files that I'll be using throughout this course. The files have been broken down into chapters, and if you are following along it's important to open the correct file for each chapter. To open this document simply double-click on it and it opens in InDesign. If you see a dialog box like this one that says there are missing links or modified links you may need to follow the steps in an earlier movie in which we created a file that this document needs.

However, usually you can go ahead and click OK, or don't update links. Also, if you see a dialog box that says you're missing fonts, you can use the find font feature in InDesign to replace them with fonts that you have on your system. On the other hand, if you don't have access to the exercise files, that's okay, you can still learn by either just watching what I do or by following along using your own text and image assets.