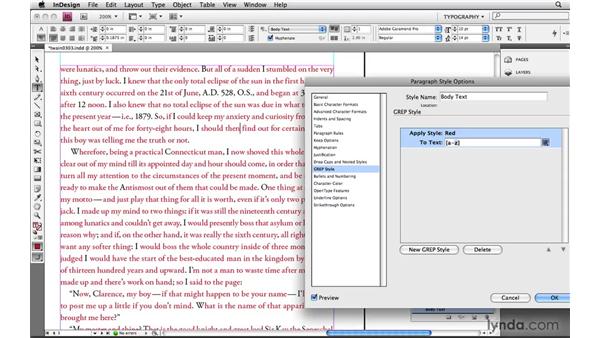 The Wildcard Metacharacters we saw in a previous movie, like any digit,…any character, and so on, provide a quick convenient way to describe…common character types.…But you may find yourself wanting to define your own custom wildcards of…specific characters to be matched.…That's what the next option under the Match sub-menu, Character Sets, allows you to do.…I'm zoomed in on the top part of Page 3 in this document, and my cursor is…inside of the body text, which is why you see it highlighted here in the…Paragraph Styles panel, where I'll right-click it, choose Edit Body Text and go…to the GREP Style area.…

I am going to create a New GREP Style to demonstrate how character sets work.…From the Apply Style menu, I am going to choose the existing Red character style.…That will just color the text red on the page and the default of any digit one…or more times is in here.…Again, if I just click in there, you'll see that it highlights any digit on the page.…That's actually a useful starting off point because any digit means any digit, 0 through 9.…