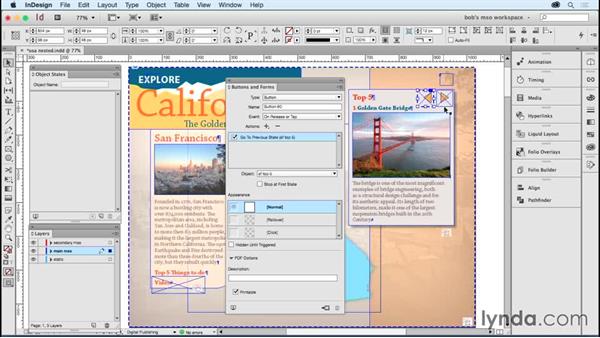 - As we've already seen, the only way to add content to nested MSOs is by pasting it in. Natively, InDesign will only allow you to do this one state at a time. This is especially tedious with buttons, which need to have their actions added after pasting them in. As we did earlier, we're gonna call on a third party plug-in, Object States Assistant, to make things easier. I've already installed and activated the plug-in, so we'll go right ahead and take a look at our page.

This is the same one we worked on earlier, and I wanna add the buttons to navigate through this nested MSO here. So, let's go ahead and take our rectangle frame tool. We'll draw out one frame for the next button, and another frame for the previous button. Now let's just go back, get our selection tool so that we can get them both selected. Open up the "Buttons and Forms" panel, and let's just go ahead and click the "Convert to Button" button.

Let's pull out the "Buttons and Forms" panel here, because I'm gonna do some work here that I didn't do earlier. I'm gonna actually add these actions, right now, before I do anything with the buttons. So, let me just deselect everything so that I've only got one button selected, and that's the go to next state. Let's just go ahead and click "Add new action", "Go To Next State". Now, I need to be a little careful here. Because I am working outside of that MSO, I'm gonna have choices for any multi-state objects that are on this page.

Right now, it's selecting "Explore California", which is not the one I want. I want to use the "sf top 5" MSO, so let's go ahead and make sure that's selected. Now, let's get our other button. Let's do the same thing, only we're going to add the "Go To Previous State" action to this one. Again, I'm going to need to select the proper MSO, so we'll just click on the drop-down and select it. Then I'm just gonna shift click so I've got both buttons selected.

I'm gonna use the "cmd + g" keyboard shortcut to group those, and I'm gonna cut them to the clipboard. Now, let's go into our "Layers" panel and make sure we've got that multi-state object selected. So, we'll just expand this. We've gotta go into the "Explore California" MSO again, and expand the San Francisco choice. Here's where our text frames are. I've got the pop-up video as well as the top five MSO in here.

Let's just make sure we've got the right one by expanding the text frame choices. Sure enough, it's this first one here. Let's go ahead and select it. So with my two buttons on the clipboard, I'm gonna go ahead and I'm gonna open up the panel menu for the "Object States". Now I've got a few extra choices here, and one of them is "Paste Into All States". So let's go ahead and pick that and see what happens. And Objects States Assistant is going to go to work and add those two buttons, but let's see where the real fun is.

We're gonna go ahead and expand this so that I can see each of the states. I've got the first state selected. Here's the group that has the buttons in it, so let's go ahead and expand that. Let me pull this out of the way, so that when I select one of these buttons, we can see what it's done. That actually still has the action applied, as does the "Go To Next". If I check some of the other states in this multi-state object, let's just pick "alcatraz", for instance.

We'll just take a look and expand that so we can see the buttons. Sure enough, it's got it's "Go To State" applied. We go down here, and that one too. I could go through the entire thing, but you can take my word for it, they're all there. So, if you have an embedded MSO with a lot of states, using this third-party plug-in, Objects States Assistant, can be a major time saver. 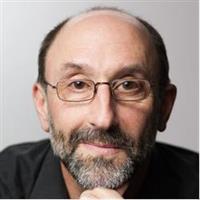