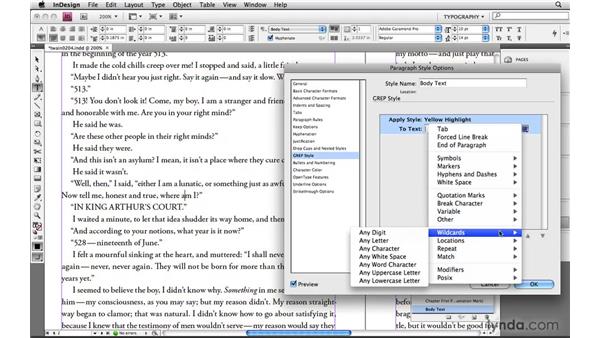 The Special Characters menu and the metacharacters for searching table in the InDesign Help files don't give you a complete list of all the metacharacters you can use. Several wildcard metacharacters are left out altogether. Let's take a look at some of these undocumented wildcards and what they describe. I'm zoomed in on the second page of this layout and my text cursor is inside of this body text and I am going to right- click on the style named Body Text in the Paragraph Styles panel and choose Edit Body Text. I am going to go GREP Style and create a New GREP Style.

Once again, I'll choose the Yellow Highlight style, so that we can see what's going on on the page as I work. And when I click in here and my default is activated, as usual, but I want to leave that in here for now and quickly delete the plus at the end of that any digit metacharacter. So, it's just any digit and we can see that applied on the page. It really doesn't change anything. But if I select this lowercase d in the any digit metacharacter and type an uppercase D and click-off, I would change that metacharacter's meaning.

I have now described any character that is not a digit, which doesn't just mean letters. It means spaces, punctuations, literally anything that isn't a digit. This same convention of switching from lowercase to uppercase applies to several other metacharacters. I'll clear this out, click off here, go back in this field and if I wanted to describe, for example, a Wildcard that is anything that's not a white space. If I choose Any White Space, I get \s. We would change that to an uppercase S and click off.

When you're putting together a complex GREP expression, it's good to know these wildcard opposites exist, because sometimes it's easier to describe something based on what it's not, rather than what it is.