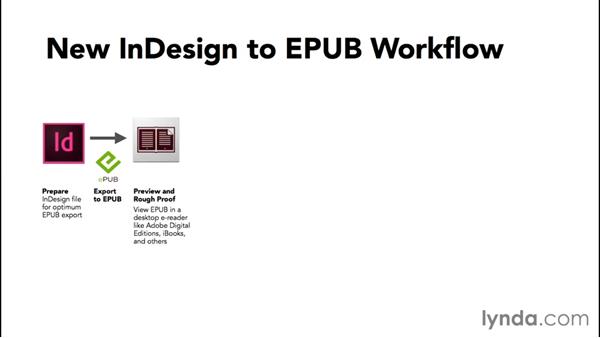 - This is the old InDesign to eBook workflow. It involves starting with InDesign and then doing a lot of editing to the EPUB file. That's what you see right in the middle with the blue diamond with a W on it, and then previewing and so on before you can ever upload it. So let me step you through the old workflow and then show you what the new, beautiful workflow is with modern versions of InDesign. So in the old workflow, you would prepare the InDesign file for optimum EPUB export, and we still do that. Then you export it to EPUB and you do a rough proof in some sort of desktop previewer like Adobe Digital Editions or iBooks just to make sure that everything made it through, all your pictures are in the right order and so on.

Then you validate it, that's what that E with a check mark is about, you make sure that it adheres to the IDPF validation because you're about to rip apart the EPUB and fix things that InDesign couldn't do. So you edit the EPUB file, its CSS files, HTML files as necessary, then you rezip it, you revalidate it, and then you preview it on an actual e-reader. Then you do a final validation to make sure it's good to go and you upload it to the e-book reseller of choice.

So a lot of e-book information, especially for people who are using InDesign, older versions of InDesign, is all about how to fix things that InDesign can't do, how to edit the EPUB file. And there are still some things that you might want to edit, but the InDesign engineers have been working very hard to make sure that you never need to edit the EPUB file. And in the most recent versions of InDesign, I would say starting with C S6 all the way up to the version of CC that we're using now, they've come a long way. So here's the new InDesign to EPUB workflow.

You're still going to prep your InDesign file, and that's what I'll be talking about a lot in this course. You export it to EPUB, you still do a rough proof on screen. Now if the rough proof isn't right, you don't edit the EPUB, you go back to InDesign and you change how you've done things in InDesign. So for example, if you forgot to add an alt tag to an image, you don't add that to the actual HTML files in the EPUB. Instead, you go back to InDesign and you add the alt tags there because the InDesign engineers realized that was something that needed to be done to an EPUB, so that added that functionality.

They added a lot of those kind of things that people used to have to edit the component files for, they added it right back to InDesign. And then you would export again to make sure that fixed it. You would run the EPUB through validation and when InDesign exports in EPUB, it is valid. I have not yet encountered a time when InDesign will export an EPUB that won't pass a validation check. But just in case it doesn't validate, who knows what the idpf.org might add to its list of must-haves in an EPUB.

In case it starts requiring a certain format for your metadata, for example, then you would go back to InDesign again and you would add that metadata to the InDesign file and then export to EPUB and run the validation check. Once you know that you have a valid EPUB that has all of the information that you want and it's 80 or 90% there design wise, then you start proofing that EPUB on the devices that your readers will be using. So you proof on an iPad or an iPhone or in Google Play on an Android device.

And if it doesn't work right, then you go back to InDesign and you re-export. You might want to make an EPUB specifically for the Nook, for example. So it's this kind of iterative proofing and editing that is the new InDesign to EPUB workflow. In the end, you'll pass a final validation and then upload it to the e-book store of choice, and you know, make a million dollars.