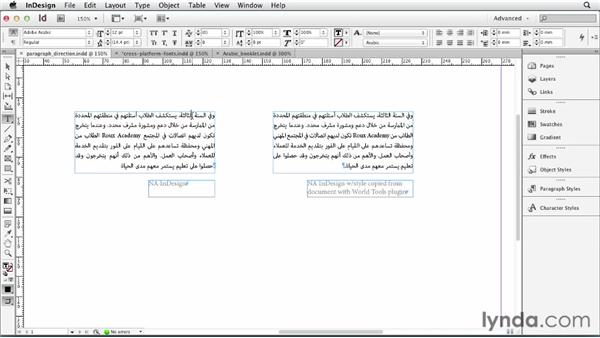 Languages of the Middle East, usually referred to as ME languages, include Hebrew,…Arabic, and languages written in Arabic, such as Farsi or Persian.…These are alphabetic languages--…Hebrew with 22 letters, Arabic with 28 letters-- and they have word spaces just like English.…But their reading direction is just the opposite of English.…ME languages read right to left instead of left to right.…So, language direction is a big issue with ME languages.…If we click in the text on this page, and as I press my right arrow key, you'll…see the cursor direction is to the left.…

That's because the language reads right to left.…Before we talk about doing layouts in Arabic, let's talk about fonts.…Remember, the Arabic fonts are at the bottom of your font list,…Arabic followed by Hebrew fonts.…Some of these fonts are installed by the OS; both Mac and Windows install ME…fonts. Some are installed by Creative Suite and some by Microsoft Office.…The Adobe fonts are nice to use because you can be sure that they…

1/10/2013
Join Diane Burns as she walks you through the ins and outs of working with multiple languages in Adobe InDesign. This course explains the differences between the major language groups and considerations for working with Japanese, Middle Eastern, Indic, and other specific character sets. Diane also shows how to install helpful plugins, choose fonts, and select the best workflow and formatting methods for various types of projects. The final chapters walk you through printing a document and creating a tablet app, EPUB, or HTML file.
Topics include: