Stroking and filling frames and paths 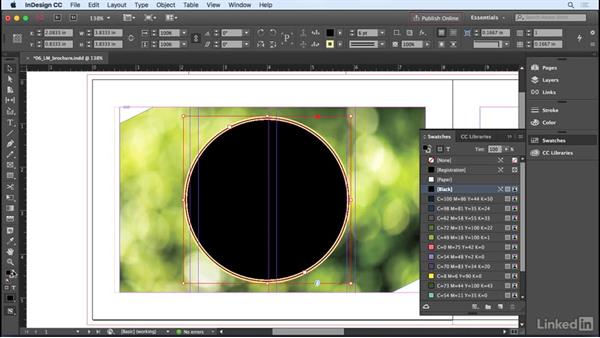 - [Instructor] Need to set the color of an object? Well, do you want to color its background fill or its stroke, what some people would call its border? InDesign, just like Illustrator, lets you apply a fill or a stroke color to any object on your page, even text. Now I have my brochure document open from my Exercise Files folder, and I'm going to select this big circular frame right in the middle of the page. Now I want to apply a fill and stroke to it. To do that, I'm going to come up here to the Control panel. And right in the middle of the Control panel, I see two little widgets, two little pop-up menus.

The top one is fill, and the bottom one is stroke. Now right now, they're both set to the none color. That means it's basically transparent. There's no color. That's what that red diagonal line means. So let's go ahead and fill it. I'll click on this pop-up menu and up comes a list of all of my color swatches in this document. Right now you can see it's set to none, but I could choose Paper for example. Paper is what InDesign calls white. Then, to close that pop-up menu, I can press the Escape key, or just click anywhere else on the screen. Okay, now let's change its stroke.

I'm going to give it a big black stroke. So I'm going to click on this pop-up menu, and then click Black. And now let's make it a little bit thicker. I'm going to come over here and change this pop-up menu from one point to something larger, say six points. So that's a solid black six point stroke. Now I can change the style of that stroke by coming up here to this pop-up menu just below the size. This is the stroke style pop-up menu. And you can see that I have a bunch of different styles in here. I'm going to go ahead and just choose this second one, Thick - Thick. Now the control panel is the fastest way to make these kinds of changes, but you can also make them over in the Swatches panel too.

So I'm going to come over here to my dock on the right side and click the Swatches panel. Now this looks almost exactly like the one we saw in the Control panel, but there's one big difference. And that is the control over fill and stroke. They're both included in this one panel. And it's this little widget over here in the upper left corner. Just like Illustrator, whichever icon is on top is the one you're changing. So right now, the stroke icon is on top. So if I chose a color, it would change the color of the stroke. But if I wanted to change the color of the fill, I would have to click on that icon to bring it to the front, like that.

So now I could change the fill color. I could pick any of these colors down here. Let's go ahead and choose yellow. I can also change the tint of this color. So I'm going to come up here and click on the word Tint in the upper right corner of the Swatches panel. That's just a little shortcut to select all the text inside that field. Now I'll make that 50%, so I'll just type five zero and then hit Return or Enter. There we go. We've got a 50% yellow color for the background fill. Now I'm going to be covering colors and how to create new color swatches later on in this chapter. Oh, by the way, if you squint, you'll see another tiny little icon in the upper left corner of the Swatches panel here.

It's a little double headed arrow. You'll see the same thing at the bottom of the Tool panel, way over here. That double headed arrow means swap the fill and stroke colors. If you click on that, it literally switches the colors. So now what was the fill color becomes the stroke color and vice versa. I don't like that black, so I'm going to change the fill to something else. Let's go ahead and fill this with say Paper. There we go. Now, as I'm looking at my beautiful masterpiece here, I did notice something strange. Something's wrong in the stroke up here.

Let's go ahead and zoom in and take a look. I'm going to hold down cmd + spacebar or ctrl + spacebar in Windows and drag out a little marquis. Take a look at what's happening between the lines of this stroke. That white fill is kind of sneaking out past the yellow line into the middle part. That middle part is called the gap of the stroke. And right now the gap is set to none or transparent, so I can see through it to the edge of that little bit of white sticking out. I don't like that, that's pretty ugly, so I'm going to change it. And the way that you fine tune all of your strokes is with the Stroke panel.

So I'm going to come over here to the dock and click on the Stroke panel. Here at the top of the panel, I can see that I have a six point stroke, and the type is set to this Thick - Thick over here. That's right, that's good. And then down at the bottom, I can see the gap color is set to none. Now I can change that gap color to anything I want. For example, I could match the yellow color or set it to Paper or something like that. But I'm going to fix this in a different way. Instead of changing the gap color, I'm going to change the alignment. In other words, where does this stroke sit on the path? Right now, up here in the Align Stroke area, I can see that the alignment is set to the center of the path.

That is, one of those thick lines goes on the outside, and the other one goes on the inside. But if I click this third button over here, now it moves the stroke. It aligns it on the outside of the path. Or, I could click this middle button, and now it's aligned on the inside of the path. By the way, if you ever need to make arrowheads, you know lines that have an arrowhead on the end, the Stroke panel is also where you do that. For example, I'm going to come over here to the Tool panel and choose my line tool. Now I'm just going to draw out a line here, and then I'm going to make it a little bit thicker in the Stroke panel.

Let's make this maybe a three point line. And now to add the arrowhead, I come down here to the Start and End pop-up menus. I'm going to change the End pop-up menu to a barbed arrowhead. There we go. Now I find these arrowheads sometimes seem a little small compared to the line. They need to be scaled up a little bit to match. So I'm going to change this percentage on the right to 150%. There we go, that looks much better. Now, as I mentioned at the beginning of this movie, you can also apply fills and strokes to text.

Let me show you how. I'm going to go back and choose my selection tool. Choose my type frame in the middle frame, and then I'm going to zoom out a little bit by pressing cmd + minus or ctrl + minus on Windows. Now I'm going to double click inside this text frame, which of course switches to the type tool. And then I'm going to select this quote. Now, remember how earlier I said you could swap the fill and the stroke? Well why don't we do just that? I'll go back to the Swatches panel. Click that little double headed arrow, and now it's switched. I have a black stroke with a none fill. You can literally see right through the text to the background.

I'll click out here so you can see it better. Of course, if that stroke seems a little to thick, we can change it. I'll select it again, go to the Stroke panel, and let's make this a little bit smaller, maybe a half a point. There we go, much nicer. You know there's so much more that you can do with fills and strokes, and that's what I'm going to be covering in the rest of this chapter.