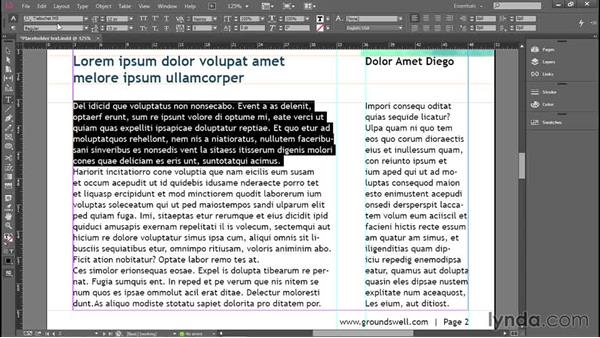 Join Deke McClelland for an in-depth discussion in this video Selecting and formatting type, part of Introducing InDesign.

- In this movie, I'm gonna show you how to select and format type inside InDesign. Specifically, we're gonna select a few words with the type tool, and then we'll change the font. But before we do, I want you to notice one of the key players in InDesign's interface, and that's the Control Panel up here at the top of the screen. The Control Panel is a horizontal strip of options, and these options are context sensitive, by which I mean InDesign is presenting you with the most important controls that you need to complete whatever task you're doing.

So if I were to go ahead and click on this text block using my selection tool, which is the one that looks like a black arrow, then I'll see some positioning options, followed by some scaling options and so forth, all of which are applicable to the selected text object. And by the way, I'm working on a small screen, so it's very possible that at any given time you'll see more options in your Control Panel than I do in mine. But regardless of screen size, notice that we're not seeing the font or type size or any of the other formatting attributes, and that's because you only see those options when the type tool is active.

Now you can get to the type tool in a couple of ways. One is the just select it here in the left-hand toolbox, or you can press the T key for type. But there's actually a more convenient way, and that's to double-click inside an existing text box using the selection tool. So let's say, for example, that I double-click on the word rent. Three things are gonna happen. First, InDesign is gonna automatically switch me to the type tool. Second, I position my blinking insertion marker so I can enter some additional text at that location.

And third, InDesign is now showing me the font and the type size and all these other formatting attributes up here in the Control Panel. Now if for some reason you can't see the font, then go ahead and click on this A icon in the upper left corner of the screen. Now at this point, I need to select some type. If you wanna select individual characters, then just drag over them like so, and notice that selects just those characters over which I dragged. It does not select entire words of type. To select an entire word, double-click on it.

So click twice in a row. If you wanna select a sequence of words, this one's a little tricky, you double-click and hold and then drag like so. So let me show you that one again. You click, click and hold, and then drag. So first click, second click and hold, then drag, and that'll select entire words at a time. To deselect your text, all you have to do is click inside of it, and that'll return you to the blinking insertion marker. To select an entire line of type, click three times in a row.

One, two, three, like so. So there's no reason to rush it. It's not really a triple-click. It's just three sequential clicks, one, two, three. To select an entire paragraph, you click four times. One, two, three, four, like so, and that'll select all the way down to the first carriage return. That is to say, the first point at which you press the Enter key here on the PC, in order to manually break the text to the next line. Now let's assign a new font by going up to this font option, which is the very first field in the Control Panel.

Notice that it's currently set to a font called Trebuchet MS. The MS stands for Microsoft, but this is a cross-platform font that's installed automatically on both the MAC and the PC. And it's a nice sans serif font, more distinctive than something like Arial. To change the font, click the down pointing arrowhead next to the font name, and you'll see the font listed in alphabetical order. Or if you've used it before, you'll see it all the way up here at the top of the list.

And so InDesign collects your most recently-used fonts, whether they have been used in this document or some other document, at the top of the font menu, and by default, it shows you up to ten recently-used fonts at a time. So let's say that I decide to switch to one of these, Myriad Pro, for example. Then I would go ahead and switch to that font. Another way to work is to click on the font name. And then you can press the down arrow key to advance through the fonts in alphabetical order.

And I should hasten to mention that your fonts and my fonts are going to vary. I also want you to see that we have these small previews over here on the right-hand side. You can also enter a specific font name, if you like. So let's say I go ahead and press the Enter key, or the Return key on the MAC, to accept this font right here, Black Oak Standard. And by the way, this next pop-up menu lets you switch between the styles that are available to this font. In the case of Black Oak, we have just one style, regular, but of course, many fonts have many, many more.

But you can also enter a specific font name, if you like. For example, I know that I wanna use a font called Minion Pro, which is spelled M-I-N-I-O-N. Well the first thing I would do, just so that we're all on the same page, both those of us using InDesign CC and those who are using CS6 and earlier, if you're using CC, you wanna click on this little magnifying glass icon and choose the second option, search first word only, which is gonna make for a simpler work flow for those of you who are new to InDesign.

Then go ahead and select the existing font name, and type in M-I-N. And that's all it take to get me Minion Pro. So you just have to enter the first few letters of the font. And then I'll press the Enter key, or the Return key on the MAC, in order to apply that font and the regular style. And now notice if I click on the down pointing arrowhead next to the word regular, I'll see a long list of styles that are available to me, including Bold Condensed, Bold Condensed Italic, and then Regular, all the way down through Bold Italic.

So I have lots and lots of options available to me, which is why, by the way, we're not seeing little bold and italic icons here in the Control Panel. That's because many fonts don't include bold or italic, while other fonts include many more styles, such as condensed, extended, semi-bold, black and so on. And that's how you select text as well as change the font and type style, here inside InDesign.