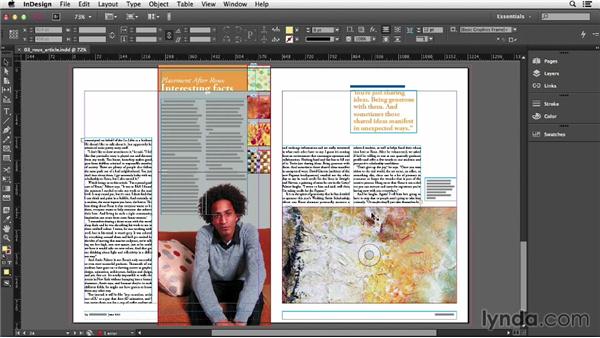 What do you do when you're using a newer version of InDesign, but a client or a colleague is still using InDesign CS6, or CS5, or even CS4? If you send them your InDesign file, they won't be able to open it. Instead, they'll get a nasty alert saying, they don't have the right plug ins. What will you do? Well, the trick is to send them an IDML file. Technically an InDesign markup language file. It's an XML thing, but you don't need to worry about the technical details. It's just an IDML file that they can open.

And you can make an IDML in one of two ways. First, you could go to the File menu and choose Save As. We looked at that in the last movie. Or you could choose Export. And in the format pop up menu in the export dialogue box, you can choose InDesign markup, or IDML. Both methods, either Save As or Export do exactly the same thing. Then when you click Save, you'll get your IDML file that you can send to somebody else and they'll be able to open it. InDesign exports your IDML in the background.

And sometimes, if it's a really large file, it can take a little while. You'll see an indicator in the application bar that shows you that the InDesign file is exporting. The indicator will disappear when the IDML export is done. But remember, using IDML to save backward to an earlier version is not seamless. Some things can get lost. Your document might change, sometimes radically, when you open a file in an earlier version. For example, let's say your document contains more than one page size. That's something I'll explain in a later chapter.

Well, all of those page sizes are completely lost if you open the IDML file back in InDesign CS4, because that old version doesn't know about multiple page sizes. It just doesn't have that feature. So all your pages end up the same size. Nevertheless, in many situations, IDML works just fine, especially when you're working with simple documents and you can't convince everyone you work with to upgrade.

6/17/2013
Find out how to build well-crafted print publications, interactive documents, digital magazines, and ebooks all in one application: InDesign CC. In this course, David Blatner guides you through the core features and tools of this popular page-layout application, including concepts such as setting up documents with master pages and easily formatting text, objects, and tables using styles. The first chapter helps those who are new to the program get up to speed with creating and editing documents. From there, the course shows how to navigate and customize the workspace, work with text frames and graphics, add and format tables, build interactive documents and EPUBs, and much more. Last, learn how to package, print, and export your finished project.
Topics include:

A: When Creative Cloud applications are updated, we refresh our training to make sure it covers the latest features and interface changes from Adobe. This update covers the inclusion of Typekit and changes to the behavior of hyperlinks and bookmarks, among many other smaller changes.

A: The author added one short movie, "Understanding print terminology," to the Packaging, Print, and Exporting chapter.