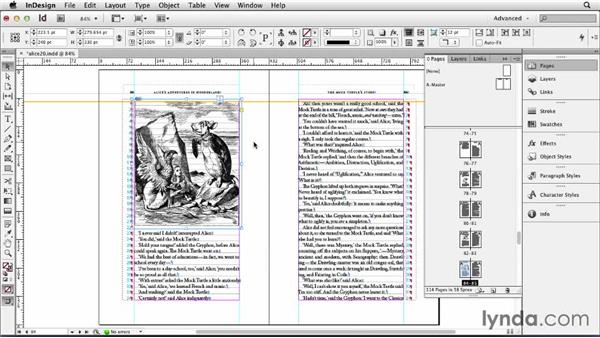 I've just spent about an hour or so adjusting the spacing on my images, to make sure that I have my text flowing the way I want it to. And to make sure that the text is readable, and that the images are in the right position according to the actual text itself. And that the spacing around them is optically even. Let me share with you some of the things that I have done. So, I have adjusted the spacing around the text wraps, just to make sure that they look even. And here is an image that has a text wrap on it. If I turn off my guides, we can see that that's a nice even text wrap. There are no collisions between the text and the image itself. And this has in certain instances required the adjustment of the anchor points on the text wrap offset, deleting some, moving others, occasionally adding some.

Secondly, there are numerous images that occur at the top of a page and I want to make sure the top of the image, not the image frame, is aligned with the text on the corresponding facing page. And to enable that or to help me in that, I have drag down a guide to the cap height of the text, and you can see that I've adjusted a position of this image so that it corresponds with this cap height. And if I turn off my guides, we can see the image and text on the corresponding facing page are aligned. Let me just show you how I made that cap height guide. It's on the master page, so I'm just going to to reverse engineer this and come, and delete the one that's already there.

Then I will come to one of my document pages and I have here an I which is a good candidate because it has a flat top to it's letter. I'm going to now drag down to the cap height, and I want the guide to go across both left and right hand pages. So, I'm going to hold down the Command key when I do so. It's going to go right there. I'm now going to cut it from the document page. I'm going to come to my master page, and I'm going to paste it in place.

Cmd+Option+Shift and V, and then optionally I prefer to just change its color to distinguish it from my other guides. So I'm going to come to Layout>Ruler Guides, I'll make it gold. So now, that cap height will appear on all of my document pages, and I can use that as my visual reference to align the top of the images. For those images that are anchored, which is the vast majority of them, I've had to make sure that the spacing above and below them is optically even.

And here's a case in point. Now, what's visually misleading to us when we see the image frame is that at the moment, it looks like there is more space above this than there is below it. But when I turn off the guides that spacing is optically even. And this is achieved by adjusting the position of the picture within the picture frame. And here's another example. Doesn't necessarily look like this, is the same amount of space above and below it.

When we have to go to turned on, turn off the guides and that spacing looks even. So, we want to make sure that it looks right without the guides turned on. So we're moving back and forth a great deal, between having our guides on and having our guys turned off. As I've mentioned earlier, the in line graphic paragraph style is alligned to the grid. So, the size of my picture frames is a multiple of my letting value, which is 15 points. But in addition to doing that, I've had to just move the image slightly up or slightly down according to how much extra white space is built into that image, so that we get an optically even result. There have been a few instances where I've needed to adjust the horizontal positioning of the image.

Now, this is a case in point, and you can see that I have size the width of the picture frame beyond the width of the text area. And the reason I'm doing that is because this picture has a frame built into it. And there is some white space around that, but it's the frame visually that we want to align to. So there's been a bit of additional scaling on pictures that have this kind of built-in frame to them. I have a couple of instances where my chapter opener is on the right-hand page.

And I have a corresponding image relating to that chapter on the facing left-hand page. Here's one right here. Chapter opener and this image relates to that. So if we look at this in the story editor, we can see that there is a line above the chapter number and that line has an anchored image attached to it. And that is the image that is currently on the left hand page. Now, without any interference, this image would occur at the top of the page. And that doesn't really strengthen the visual relationship between it and the chapter opener on the right hand page. So, what I have done here is select that paragraph including the inline graphic. Selecting paragraphs with in line graphics can sometimes be a little bit tricky and here's how I've done it.

I've placed my cursor in front of the C of chapter and then just select it back from there. And I now have the preceding paragraph selected, and we can see that I've achieved this moving down of the image by adding some negative base line shift. Now, this is a little bit cumbersome. It is a little bit fragile, I wouldn't want to do this early on and I wouldn't want to do it to often, but I'm doing it here and it works. I'm using minus 90, remember we have a letting value of 15, 15 multiple that by 6 is 90. It's moving it down by six line spaces.

More importantly though, visually, it is lining up with the text on the corresponding right hand page. Something that has been tricky to achieve is making sure that the last page of each chapter is at least ten lines long. If I turn on my guides, we can see by my line numbers that each chapter begins, well, the chapter title itself is on line nine. And I want the preceding page of a chapter that ends on a left hand page to be at least that long. Otherwise we end up with an uncomfortable amount of white space, just looks like unconsidered or ill considered white space beneath the ending of the preceding chapter.

So in order to achieve that, I have just adjusted the scaling of my images throughout the chapter. And here's another case in point. And then finally, I just made sure that all of the images that have text wraps on them, ie, those that are not anchored within the text flow, are on their own separate layer, especially for tricky ones like this. Perhaps the most famous one in the book that of the Cheshire cat, which is a shape clearly designed to have text wrapped around it, but it's quite a tricky shape to work with. And in order to achieve in this case, I have actually added in two rectangles, and it's those rectangles that the text is wrapping around, rather than the image itself.

All three elements are grouped together, and then just for ease of selection and modification thereafter, they are placed on their own separate layer. So those are the approaches I have taken to adjusting the position and the scaling, and the text wraps on my images. And that leaves me now with a document that is currently 114 pages long. If you're following along with me and you have a different number of pages, that is totally fine because we're all doing this in a slightly different way. But we're using a similar approach.

This is not the first time I've done this, and doing it this time around, it's ending up different from the time I did it before, no better or worse but just slightly different. We do still have a number of spacing problems that exist. I'm aware of them, but we haven't got to addressing them yet. For example, at the top of page 92 in my case, I have a very nasty orphaned word there, carried over from the previous paragraph. Obviously, that needs to be fixed. And also on page 81, another problem that I see is, I have what's referred to as a runt line.

Where the last line of a paragraph is shorter than the value of the indent of the paragraph which follows it. So that also needs to be fixed. And there are numerous problems like that, and we're going to fix those in the next chapter.