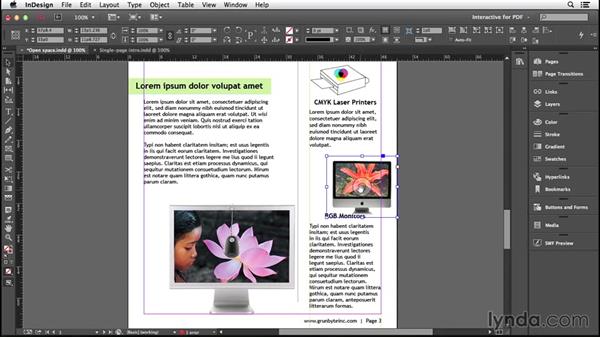 Join Deke McClelland for an in-depth discussion in this video Placing artwork, part of Introducing InDesign.

- In this movie, I'm going to show you how to import artwork into InDesign. This might include photographic images, or pieces of vector-based line art, or logos, they all work the same. I'll also show you a great trick that allows you to place multiple files at the same time. Now notice that just for the sake of variety, I'm recording this chapter on the Mac, but of course, everything works the same on the PC. I'm looking at Page 3 of this document, and it includes a couple of open spaces here that are ready and waiting to accept artwork.

The thing is, when you first open this document you're going to see an alert message that tells you that the document contains a link to a source file that is missing. For now, just go ahead and click Okay, but I'll explain exactly what's going on in the very next movie. Now to import the artwork, go up to the File menu and choose that same command that we used to import text in a previous movie, which is the Place command. Again, it has a keyboard shortcut of command D here on the PC, or control D on the Mac.

Then if you're working along with me, you want to navigate to the 06_images folder. Note that we have a couple of files that begin with tilde symbols. Those are temporary files that InDesign creates as you're working on documents. Now you may see your files in the list, as I am right now, or you may see them as larger thumbnails. In any event, we're looking for these two files, Art-calibrate.psd, and Art-monitor.psd. Psd indicates a layered Photoshop document, but these files could just as easily be .tif, or .jpeg, or .ping files, or even a .ai file, which indicates a piece of Adobe Illustrator artwork.

But notice, this time we're not seeing a blue number, and that's because we have just one file left. But let's say you change your mind. You don't want to place this image at this location. Then you can go up to the Edit menu and choose the Undo Place command, or you can press that standard keyboard shortcut command Z here on the Mac, or control Z on the PC. That not only undoes the placement, but it also reloads your cursor, so that you still have two images left. If you want to switch to the other image, just go ahead and press any of the arrow keys.

For example, if I press the right arrow key, I will switch to the image of the orange flower, and then I could click to place it like so, and now I'll move my cursor over to this larger area and click here in order to place it as well. Now I want to move these images a little bit so that they're better centered in their columns. So I'll click on the orange flower image to start. When you click with your selection tool, which is that black arrow right there, you want to make sure that you don't click on this little ring.

That ring is known as the content grabber, and I'll show you how it works in a future movie. But for now, just make sure your cursor does not appear as a hand, and that it appears as a black arrowhead instead. If, for some reason, you end up accidentally clicking like so, and you get the hand tool any time you move your cursor into the image, then just press the Escape key in order to switch back out. Then go ahead and drag that image so that it's centered inside of that right-hand column. You can also nudge the image from the keyboard by pressing an arrow key.

So if I press the up arrow key, I'm nudging it upward in 1-point increments, that is 1/72 of an inch. To nudge it 10 times that far, 10 points, that is to say, go ahead and press shift with an arrow key. In this case I press shift up arrow, which moved it a little bit too far, so I'll just press the down arrow key a few times to nudge it where I want it to be. Then I'll click in this larger image. Again, don't click in the ring. Click on the image itself. Then I'll press shift left arrow a few times, and then shift up arrow as well.

Notice, because the background of the image is transparent, we're not covering up the text until I move this image quite a bit higher, like so. So the monitor will cover the text, but the transparent background behind the monitor does not. So now I'll press shift down arrow a few times until I have this monitor more or less centered down here in the bottom left corner of the page. All right, now I'll click off the image to deselect it. The next thing I want to show you is how you can place multiple images at the very same time.

You might figure, well, we kind of already did that. Well, we had to click twice, first to place the orange flower, and then to place the girl with the purple flower. What I want to do is place four images in one operation. So I'll go ahead and switch over to the single page document here, and then I'll go up to the File menu and choose the Place command. This time we want to double click on the Saturn images subfolder, and therein you'll find a total of four images. Now, to select them all on a PC, you can click on the first one and shift click on the last one to select a range of images.

But when I'm working on the thumbnail view here on the Mac, I only select those first and last images. To select all of them, I'll marquee like so, and then I'll click on the Open button down here in the lower right corner. Now another way to place an image is to drag. That way you can scale the image as you place it. But notice I only place one image, which is not what I want. So I'll go ahead and press command Z, or control Z on a PC, to reload that image. Notice this time the little blue number inside the parentheses is a 4, because I have loaded four images in all.

To place them all at once, I'm going to drag from this guide intersection right there, all the way down to this intersection, which isn't entirely necessary. That's just going to give me enough room to work. Now with my mouse button still down I can change the number of rows and columns that I'm placing, by again pressing the arrow keys. So notice if I press the up arrow key I'm adding rows. If I press the down arrow key, I get rid of the rows. I want two rows of all, and you can tell you have rows because we have those dotted horizontal lines that indicate the gap between the rows.

To add columns, you press the right arrow key. And then to get rid of columns, you press the left arrow key, like so. In all, I want two rows and two columns, at which point, when I release, I will place all four of the images at the same time. Now I'll go ahead and click off the images to deselect them. And that is how you import photographs and other graphics into any document here inside InDesign.