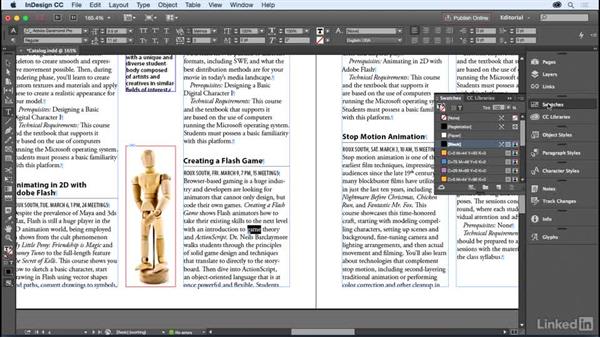 Learn about the role of paragraph styles and character styles in InDesign and how to apply them to text.

- An InDesign document is not complete…without paragraph styles and character styles.…These will be listed respectively…on the Paragraph Styles and Character Styles panels.…If you don't see these,…they are either under the Type menu…or under the Window menu in the Styles group.…Through the use of styles, the designer can create…a look for a certain class of paragraph…and then consistently apply that look…to other paragraphs of the same type with a single click.…

Thereafter, changes to the appearance of type can be made…by editing the definition of the paragraph style.…I'm now going to zoom in on the bottom portion…of this left-hand page by holding down…Command and spacebar and clicking and dragging.…I'll turn off my guides here,…because they're a little distracting.…Grids & Guides, Hide Guides.…I'm retaining my hidden characters and my frame edges.…So I'm going to select this text…and return it to Basic Paragraph…and then re-apply the styles just so you can see…how easy and fast it is to apply styles.…