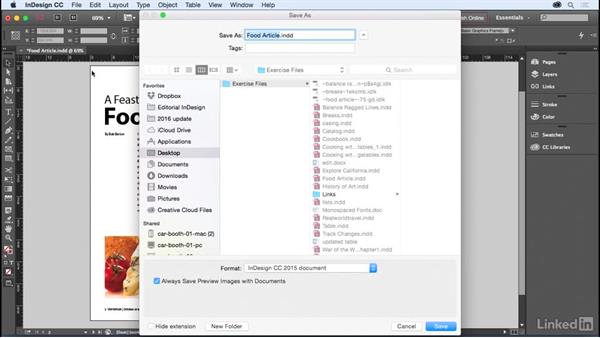 Learn the fundamentals of opening and saving, the difference between documents and templates, and how to save for backward compatibility.

- [Voiceover] Here's how to open…and save InDesign documents.…There are some different options.…What I'm looking at right now is called…the Start screen.…In earlier versions of InDesign,…this was called the Welcome screen.…And it looks slightly different.…And from the Start screen,…you can open a recent document.…You can open a new document.…You can click on the Open button…and navigate to a document within your folders.…Here's a list of my recent documents.…Now many people, especially long-time users of InDesign,…prefer not to use the Start screen.…

And in fact, you can come to your Preferences,…your general Preferences.…Now, if you're a Windows user,…your Preferences will be under the Edit menu,…right at the bottom.…And you can say, "Don't show me the Start screen."…Or you can just ignore it as I'm going to do now.…We also have a list of recent documents…on this flyout menu.…So I'll choose Open…and I'm going to go to my exercise files folder…and open the food article document.…

If I make changes to a document,…and I'm now going to just select that picture…