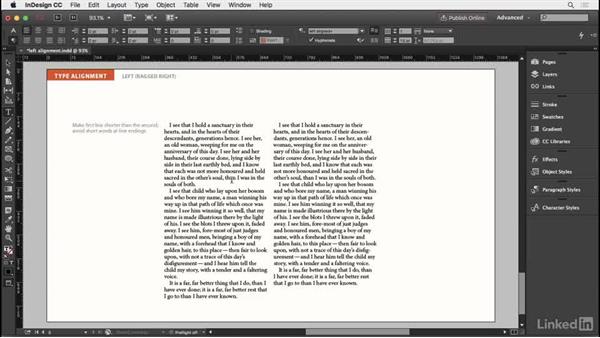 - [Voiceover] In this chapter I'm going to look at the four principle types of text alignment, left, center, right, and justified, what InDesign refers to as justified with last line aligned left. Moving to the second page, we'll begin with left aligned type. Left aligned type is considered informal and organic, and because every line starts at the same place, and all the word spaces are equal width, it's highly readable.

The varying line lengths add shape and interest, as well as white space. The challenge of left align type is to control the rag, or the uneven right side. Here I have two pieces of identical text. On the left the text is not hyphenated, and on the right it is hyphenated. In terms of the hyphenation settings I'm using, all I'll say for now is that only words with a minimum of seven letters are candidates for hyphenation.

We can see more easily how this affects the rag on the next page, where I've highlighted the line endings. By allowing the words to break, I'm avoiding the large holes that we see in the type on the left, such as here, and here. Hyphenation is always a compromise, but in this case, I think it's a compromise worth making. If I chose to also hyphenate capitalized words, the rag will be improved further, but since the words may be unfamiliar, I don't think that's an acceptable compromise.

Moving to the next page, it's possible you can reword the text for a better rag. But if you're working with a historical text, this is obviously not an option. In the text on the right, I've made three improvements, and I'm now going to replicate those improvements with the text that we have here on the left. Just so that we can compare it, I will duplicate this, holding down Option or ALT and the SHIFT key, as I drag away from it. I'll select the text. The first improvement is to switch to the Adobe Paragraph Composer.

Now this is perhaps not a fair comparison, because the Adobe Paragraph Composer is the default option, but I just wanted to point out that by choosing this, I'm avoiding the problem that we see here where we have the first line longer than the second line. Secondly, I'll turn on hyphenation, and I'll use these settings, words of at least seven, after the first hyphen, four, before the last, three letters, a hyphen limit of one.

I'll move the slider all the way over to Better Spacing, and I'll uncheck those three check boxes. And finally, where single letter words occur at the end of a line, I want to prevent that. So I'm going to select I have in this case, and come and apply a No Break Character Style to that. Now I've incorporated the No Break instruction into a Character Style, but you can also get it on a case-by-case basis from the Control Panel menu.

And that is just going to keep my selected text together. So those are some ways in which you can control and improve the rag of your left aligned text.

6/30/2016
InDesign Typography explores the numerous type options, type-related features, and type-specific preferences of Adobe InDesign. Using practical, real-world examples, instructor and designer Nigel French explains the purpose of each feature and describes the conventions for how and when to use it. Part 2 focuses on "macro typography" or how type is arranged on a page. Nigel discusses text flow, type alignment, indents and spacing, text wrap, and lists. He also shows how to use InDesign styles, which will save time formatting text and keep your designs more consistent, robust, and easier to edit. The final chapter address hyphenation, line breaks, and other type controls; the selective use of white space; the value of grids in graphic design; and approaches for combining multiple typefaces in a single layout.

To get the most from this course, make sure to watch InDesign Typography Part 1.
Topics include: