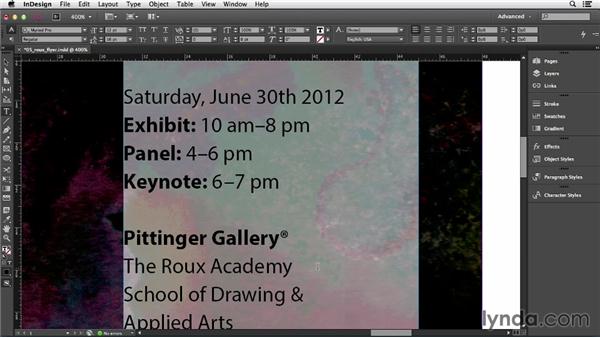 Quick, tell me what the keyboard shortcut is to type the registered trademark symbol. Or how about an Em Dash? If you don't use these characters very often, there's no reason to clutter your head with trying to remember the shortcuts. InDesign has a couple of features that make inserting special characters a breeze. I'm going to select this text frame on my page and zoom into 400% by pressing Cmd+4 on the Mac or Ctrl+4 on Windows. Now, I'll double-click after the word Gallery here to switch to the Type tool and place a cursor there. I'd like to add a certain special character.

And to find it, I'm going to go to the Type menu, and I'm going to look almost all of the way down near the bottom at this menu called Insert Special Character. Inside this Symbol submenu, we'll find many of the characters that people often need such as bullets, copyrights, ellipsis, the paragraph symbol. That's a little pilcrow symbol that's kind of mysterious. And then finally, here's the one we're looking for, the registered trademark symbol. As soon as I click that, InDesign types the character for me. There are lot's of other special characters hiding in there, too.

So, for example, let's say I don't know how to type this En Dash. You want to use an En Dash instead of a normal dash or a hyphen when you're talking about a range of numbers or dates. So, let's say I delete that. I just press the Delete key. How would I get a new one? No problem, go back to the Type menu. Go back to Insert Special Characters. And then instead of a Symbol, I'm going to choose Hyphens and Dashes. There it is, there's the En Dash. Click it and it places it. Now, perhaps I don't like the amount of space there is between that six and the En Dash.

I can place my cursor between them, simply by clicking there. And I can add a little bit of space with a special wide space character. Down here, near the bottom of the Type menu, I'm going to choose Insert Right Space. And inside this submenu, you'll find all kinds of special spaces. For example, the very large Em Space, it's always wide, it's always the size of your text, in fact. So, in 12 point test, it's 12 points wide. Or you could choose the sort of medium sized En Space which is half an Em, but we want a really tiny little space, so I'm going to choose the Hair Space.

When I choose that, InDesign actually places a special width Hair Space between those two characters. Now, there are all kinds of other ways to add and remove spaces between characters, such as kerning. And I'm going to be talking about that in a later chapter. But it's great to know that InDesign has these special characters to use if you want to use them. Of course, many of the font's you are using have special characters built into them, ornaments and math symbols, and all kinds of stuff. But you may not know how to type them. Fortunately, InDesign has a special feature called the Glyphs panel and you can find that under the Window menu or even easier under the Type menu.

Just choose Glyphs. The Glyphs panel shows me every character that's inside my current font, wherever the cursor is. It's really quite incredible, you can just scroll through this list and find all kinds of things. In fact, I'm going to make this panel a little bit bigger, so we can see it better. And then, I'll click this Zoom button to make the characters even larger, too. You can scroll through this list and see every different character inside of a font, and some of these things I would have no idea how to type. I don't even know what some of these characters are.

Now, for this document, I'd like to place a special ornament. Kind of a symbol before the P in this word Pittinger. So, I'm going to click once before the letter P. And now, I'm going to change the font inside the Glyphs panel. Down here in the lower left corner, I can select this font just by clicking it. And then, I'm going to change to Wingdings. I'll just type win and InDesign guesses that I want the font Wingdings. Now I'll hit Return or Enter, and you can see all the different characters inside the Wingdings font. I can scroll through here until I find just the character I want. This one looks nice, so I'll double-click on it, and InDesign insert's that character, where the cursor is.

And notice that InDesign also placed that character up here in the recently used area. And that's kind of cool because I might want to use that same character over and over again. For example, maybe I want to put that same glyph before the E in exhibit. So, all I have to do is click once before the E, and you'll notice the Glyphs panel has changed to reflect the cursor In this case. That E is set to Myriad Pro Bold, so the Glyphs panel reflects that. But, it still keeps my recently used glyph up here. So, all I have to do is double-click on it and InDesign automatically adds it.

Now, Wingdings and special fonts like this, and many of the Pro fonts from Adobe, have a lot of special characters in there. So, check them out. Take a little time to go through and just scroll through the Glyphs panel. See what kind of treasures are hiding in there.

6/17/2013
Find out how to build well-crafted print publications, interactive documents, digital magazines, and ebooks all in one application: InDesign CC. In this course, David Blatner guides you through the core features and tools of this popular page-layout application, including concepts such as setting up documents with master pages and easily formatting text, objects, and tables using styles. The first chapter helps those who are new to the program get up to speed with creating and editing documents. From there, the course shows how to navigate and customize the workspace, work with text frames and graphics, add and format tables, build interactive documents and EPUBs, and much more. Last, learn how to package, print, and export your finished project.
Topics include:

A: When Creative Cloud applications are updated, we refresh our training to make sure it covers the latest features and interface changes from Adobe. This update covers the inclusion of Typekit and changes to the behavior of hyperlinks and bookmarks, among many other smaller changes.

A: The author added one short movie, "Understanding print terminology," to the Packaging, Print, and Exporting chapter.