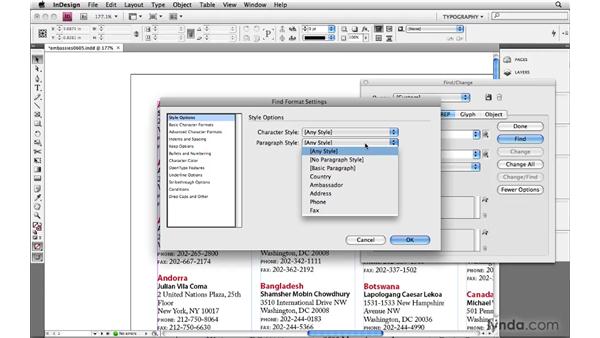 Although GREP is primarily a text- based feature, you can actually use GREP to…insert graphics too.…By combining GREP Find/Change, Styles and Anchored objects, we're going to see…how you can insert hundreds of anchored object frames in mere seconds.…To finish off the layout of this directory of embassies, I want to add before…each country name, a small graphic frame into which artwork for the flag of that…country is going to be placed.…They are going to go in as anchored objects, so that they flow with the…text and they all appear in the same place above each line.…

So the first thing I'm going to do is create a graphic frame for myself as a…placeholder to receive those files when I'm ready to place them.…I will draw a frame out here with the Frame tool, roughly the size and…dimensions of a small flag.…I'll switch to the Selection tool and then from the Edit men, choose Cut to copy…it to the Clipboard.…I'm going to put my cursor in at the beginning of the very first letter in the…very first country in this list and then I'll go to Edit>Paste to insert that…