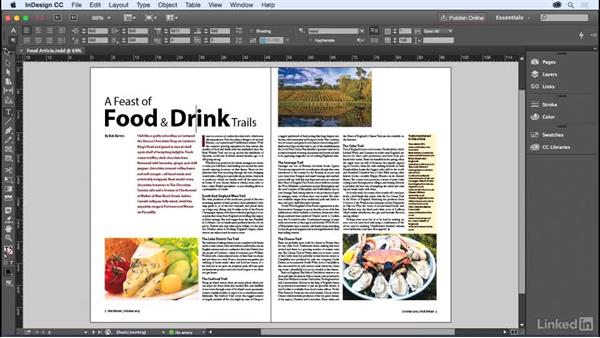 Get an orientation in the commonly used interface elements of InDesign.

Let's take a look at the InDesign interface.…Firstly, it's colour.…Now this is purely cosmetic but if your…interface is a different shade of grey from mine…and you're wondering why,…It's because you can change the…interface colour in your preferences.…Now, as I mentioned for Windows users,…your preferences will be under the 'Edit' menu…the very last item under the 'Edit' menu,…but I'm going to come to my 'Application' menu…and to preferences and to interface.…

And here is where I can change the colour…of the interface.…Now I happen to prefer it the way it is…so that's how I'm going to leave it.…If you were to change it,…it would become an application preference.…That is, it stays that way until somebody…else comes along and changes it.…In the 'Tools' panel on the left hand side,…just in very broad strokes here an overview…of the 'Tools' panel, there are two tools that you…will use with great frequency.…The selection tool, which allows you to select frames…and the type tool, that allows you to select…the type within the frames.…