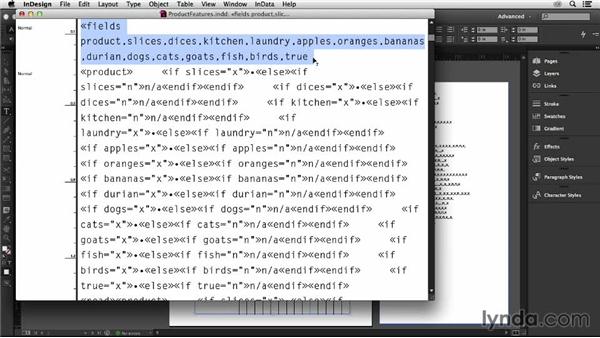 The first InDesign plug-in I want to tell you about is one of the simplest and least expensive of the third-party options. It's called InData. Whenever someone says that data merge just doesn't offer enough features, the first thing I suggest is InData because it lets you do all kinds of commonly needed tasks, like automatically inserting headers and section breaks, and it lets you do if-then statements. And, well actually look, instead of me telling you about it, let me just show you. First, you can find InData here at the Em Software website.

They have detailed instructions on how to download a demo, install it, and get up and running. Now I'll switch to InDesign and show you how it works. I've installed InData, and I know that because when you install InData, you get an InData menu up here. I have demo document opened here, but because this is commercial software, you won't find this one in your exercise files folder. So just go ahead and watch this. No need to follow along with me. InData has a neat feature that you can, if you want, put your data on the clipboard or out on the pasteboard if you want to.

You don't have to, you could use an external file. But it turns out to be really helpful in a demo like this. So here, I have all my data out on my pasteboard. Let's go ahead and zoom in on this, so we can see it better. You can see that this is comma delimited data. And the first field is the name of a product. And then the other fields are features of that product. And x means this product has that feature, n means that it's not available. Now, I want these fields to appear differently in my final table. And we'll see how I do that in a minute.

inData does not have a pretty panel that shows you all the fields like Data Merge does. Instead, you type the fields yourself to create something called a prototype. Basically, a template or set of instructions that InData uses to format your data. And you know how Data Merge is not designed to flow all your records into a single text story? Well, InData is the opposite. It can only flow your records into a story. So let's zoom out to fit the page in the window and we can see that I have one big text frame on this page. It looks like a table, but it's not.

It's just a frame. And inside that frame I've created a prototype. It's a little hard to see in this template. So, let's go ahead and select that frame, and open up the story in Story Editor. I'll go to the Edit menu, and choose Edit in Story Editor. Okay, this is the prototype that I made. And don't freak out, it's actually far simpler than it looks. You just have to take it one piece at a time. Up here on the first line, you can see the name of all of our fields. Data merge relies on the first row of the data in the csv or text file to name the fields.

But InData makes you type the names of the fields here in the prototype. So we're just naming the fields. The first one is called product, the next one is slices, the next one is dices and so on. On the second line of the prototype, we actually start to insert the fields in the story. InData uses the characters called chevrons or dma for all it's instructions. So this means, insert the data field call product. Then there's a tab character. And then another instruction. And one of the cool things about InData is that the instructions are written in kind of a natural English language.

So, this says if the field, the one that's called slices, that slices field equals x, that is there's an x in the data field. Then insert a bullet character. Now this is very cool because it means that InData can swap out characters for you or do all kinds of clever things to your data when you import it. Now, this next instruction says else, in other words, if it's not an x, then is it an n? Well if slices does equal n, then insert na for not available.

But then, if it's neither of those, then don't put anything. Now all the rest of this stuff is the same thing over and over. I literally just copied and pasted it, and then changed the field name in each one. So dices, and then kitchen, and laundry, and so on. All right. Let's close the story editor, and see this in action. To merge the data with our prototype, we place our text cursor anywhere inside the story, or select the text frame with the selection tool, and then go up to the InData menu, and choose Import From File, or in this case because the data's on the pasteboard, I'm going to choose Import From Pasteboard.

When I do that, InData processes the data and then formats it really quickly. Let's go ahead and zoom in here, so we can see what it did. Now you can see that everywhere there was an x, there was a bullet, everywhere there was an n, it now says n/a, and the whole thing is formatted to look like a table. So we just formatted a bunch of data really quickly and its all in one flowing story. Now, this is just a very simple example of the kinds of things you can do with InData. Let me quickly show you a more complicated example. I'll switch to Excel for a moment.

And I just want to show you, this is 45,000 rows of data about museums and galleries. So, how long would it take you to format this into a directory? Well let's go back to InDesign and see the final document. I have it open here. This is the final version of the document. It's about 170 pages. You can see the rather complicated prototype off here on the pasteboard. And let's go ahead and zoom in here and you can see that all of this data has been formatted. Once that prototype was created inData laid out the entire thing in about ten minutes. Now look I'm not trying to sell you on buying this particular product but I am trying to sell you on the idea that plugins can make you super efficient when you need to be.