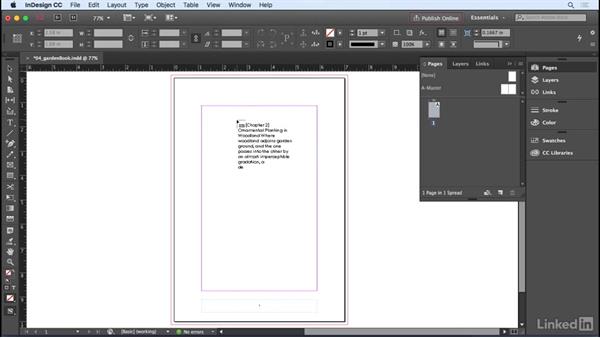 - Okay. Let's say you have a text file, such as this word document and you need to get it into InDesign. Now the easiest method is just to select some text and copy and paste it. And while this often works just fine, especially for small amounts of simple unformatted text, I really don't recommend it for anything more than a paragraph or two. And I certainly wouldn't use copy and paste for any text that was formatted, or included foreign language or special characters. I've just seen too many problems over the years with text showing up totally wrong after pasting it.

Instead I strongly recommend that you use the place command in InDesign, it's far more reliable. Let me show you. I'm going to switch back to InDesign, and then I'll go to the file menu. I'll choose place or you could press Command D or Control D on Windows. Now I'm going to select that text file, this 04_gardenbook.docx file. That's simply a word document, but it could be any text or even an RTF file. Then I'll click open. Because I did not have any frame selected on my page InDesign loads the place cursor with that story.

If I had an empty frame selected, the story would have gone right into it. But here to place a story into my InDesign document, I'm going to move my cursor up to the left corner of the margin guides. I'm going to wait until I see the cursor change to a little white arrow. You see, it's a subtle but important change. This black arrow when I get close to the guides turns white. That white cursor means that when I click it's going to snap to the margin guides. So I'm going to get as close as I can to those guides, but I don't need to worry about placing it exactly right.

Now I'll click and InDesign makes a text frame and flows text into it. Now notice that this document had no text frame on the page. There is also no frame on the master page. It's just a blank document. Also, if you look over here in the pages panel you'll notice that there is just one page in this document. But I happen to know that this is a much longer story. It should have filled multiple pages. I really wish I could get the entire document into InDesign, and fortunately I can. Let me show you how.

I'm going to undo this by pressing Command Z or Control Z on Windows. And now I get my place cursor again. This time I'm going to place this text file, but with a modifier key held down on my keyboard. I'm going to hold down this shift key, and when you press shift the cursor changes just a little bit. You get this kind of S shaped arrow in there, and that indicates that when I click it's going to flow all of the text. So once again I'll move the cursor to the upper left corner and get kind of close. And then I'll click with the shift key held down.

Now this time InDesign not only imported just that one page but the whole text story and it created a bunch of pages for me. On each of those pages it created a new text frame, and then it threaded the text from one page to the next automatically. So that shift key modifier is really important when you're importing a long story. Now there's a couple of things I want to point out. First, I didn't get quite close enough to the top margin so it didn't snap. That's okay. I can click on that and just drag this up to snap against the top margin.

Second, look at the formatting on this page. It looks much nicer than it did back in word right? Let me go back to Word and I'll show you. Here it's all Arial and Georgia. The formatting here in Word makes it easy to edit, but it's not very pretty. Here in InDesign it looks totally different. How did that happen? Well I'm going to be talking about paragraph styles and character styles in a later chapter, but I do want to point out right now that if the styles are named exactly the same between Word and InDesign, then InDesign will throw away the original boring formatting and it'll use the formatting that's defined in the InDesign document instead.

For example if I double click on this to switch to the type tool and then make sure that I'm in the paragraph formatting mode of the control panel, I can look up here at the paragraph style's pop up menu. I can see that this paragraph is set to the chapter title's paragraph style. I have a bunch of paragraph styles in here, and they're all named exactly the same as they are in Word. Now this work flow is typically what you want, so it's really helpful to make sure that you have the same named styles in your Word documents and your InDesign documents. Okay now a moment ago I mentioned something about threading, the fact that this story threads from this page down to these other pages.

Well what's that about? How can you thread stories manually from one text frame to another? Well that's what I'm going to cover in the next movie.