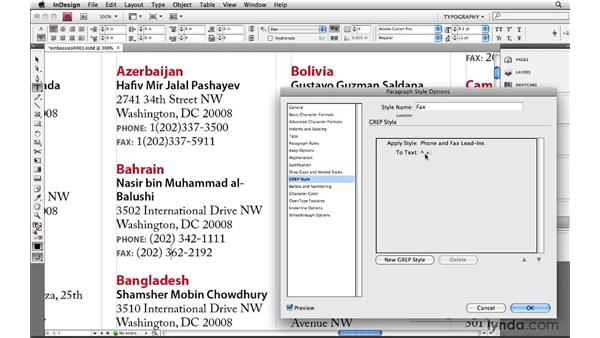 If you're familiar with, or have used Nested Styles, which have been around…since InDesign CS, you may be wondering what the specific advantages of GREP…Styles are versus Nested Styles.…Nested Styles are powerful and very easy to use, but they do have certain…limits and once you reach those limits and need to do more, you need to use GREP Styles.…Let's take a look at the basic differences between one and the other.…In this document, there are a number of Embassy listings and for each there is a phone and fax.…

The line with the phone and the line with the fax, each start with a Nested…Style, that styles the word Phone and the colon, the word Fax and the colon,…differently from the rest of the line and it does it automatically.…I am going to put my cursor in one of those styles.…Open the Paragraph Styles panel and we can see the Fax style is selected.…So, I am going to right-click on that and choose Edit Fax.…I will go to Drop Caps and Nested Styles and in the Nested Styles area, you…can see there is a character style called Phone and Fax Lead-Ins that's…