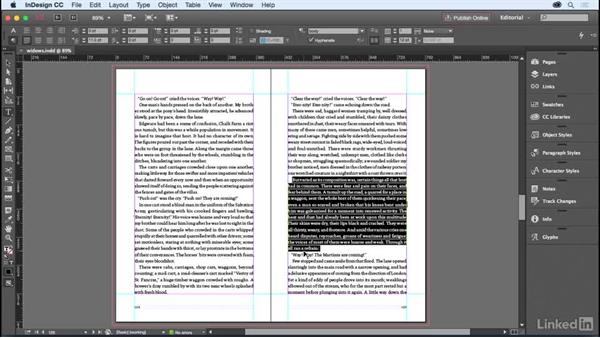 Learn how to fix the common spacing problems in InDesign.

- [Voiceover] The terms "Widows" and "Orphans"…refer to lines that become dissassociated…from the rest of the paragraph.…Last lines stranded at the top of a page…or first lines stranded at the bottom of a page.…The best way to avoid these problems…if you have the option, is with a subtle rewrite.…But when rewriting isn't possible,…you can adjust the tracking of the type.…Tweak the amount of space between…the words and the characters.…This is typically the responsibility of the designer…but if this task should fall to you…in the late edit stage, here are some tips.…

I'm gonna move through this chapter…by holding down my Option or Alt key…and I'm pressing the page down key,…and we see that…at the top of page 130…we have a widow,…and we have another one at the top…of page 132.…Often the solution to these problems…lies in the text that precedes them,…and in this case, I'm gonna move to…page 127,…where I'm going to adjust…the spacing on this paragraph.…